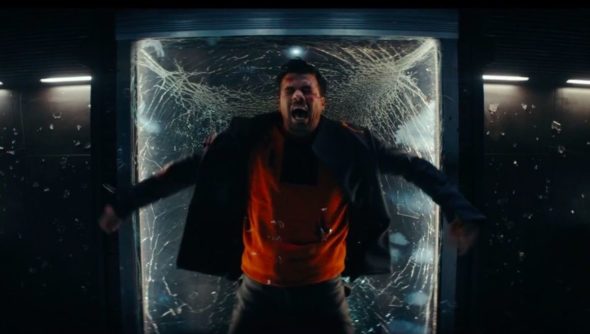 It seems that George R.R. Martin’s Nightflyers TV show has been permanently grounded. It’s been revealed that Syfy has cancelled the series and won’t be ordering a second season.

A Syfy psychological thriller from showrunner Jeff Buhler, Nightflyers is based on a novella and short stories collection from Game of Thrones‘ Martin. The cast includes Gretchen Mol, Eoin Macken, David Ajala, Sam Strike, Maya Eshet, Angus Sampson, Jodie Turner-Smith, Phillip Rhys, Gwynne McElveen, Brían F. O’Byrne, Bronte Carmichael, and Miranda Raison. Set in 2093, the story centers on the passengers and crew of the advanced spacecraft, The Nightflyer, which embarks on a mission to make contact with a mysterious alien at the edge of our solar system, with the help of a lethal L-1 empath.

The first season of Nightflyers averaged a 0.09 rating in the 18-49 demographic and 395,000 viewers. The show ran for 10 episodes over the course of two weeks in December 2018. Compared to other Syfy programs, it was a mediocre performer.

According to Deadline, Nightflyers was conceived as an ongoing series but the cable channel has concluded it is best left as a one-off limited series (despite having ended with a cliffhanger). The cast’s options have expired.

What do you think? Did you like the Nightflyers TV show? Would you have watched a second season?

I wanted a season 2… I’m not sure what’s going on with SyFy… usually my favorite channel. Btw, the picture above does NOT go with this article! Nowhere in the article is “The Expanse” mentioned!

Thanks for spotting that.

Thank you for making the change! 😀

To many unanswered questions. Please bring a second season, to at least put a finish on it

I I’m hanging out for season 2 , please don’t cancel , can’t waite to see what happens

Why do they always cancel the good SYFY shows and renew the cruddy reality shows. Not everyone wants to watch fake stars fighting and stabbing each other in the back. There are a lot of people all ages that love space, monster and mystic shows. Give us a brake and put the Nightflyers back on for a few more seasons

WHAT THE HELL!!!! Who is in charge and how bad was their head injury?! This was such an easy choice!

Yes, I loved the show! I really wish they at least have a movie or one last episode. I hate when a show is cancelled and we never get to see how it ends. Seems like SyFy is cancelling all the shows I love watching.

Yes i wouldve watched a second season i loved the show!! If it has to be canceld then bring it bk for one more and end it right. Im tired of these channels canceling shows leaving them hanging. They need to be ended the right way!!

A pic from The Expanse to accompany a Nightflyers story? To illustrate the suckitude of Syfy’s sci-fi cred, I assume.

I watched the show via Netflix and it is one of the best SF show this decade together with the Expanse. Which the latter they also had cancelled (on Netflix). Are they growing a dislike of the SciFi fans. Please bring it back. This serie on itself only is worth my Netflix supcription.

Well, SYFY loses yet another show I watched. After “Killjoys” ends this summer, I’m done with the network.

yes I would have watched it

More than logic.
Starting the show (first scene) with almost the end the cancelation it’s no surprise.
It’s even some kind of relief.

I really wanted to like it, but it was pretty bland.

No!!! Sadly they did a poor job of story telling. It could have been amazing, but was hard to watch.