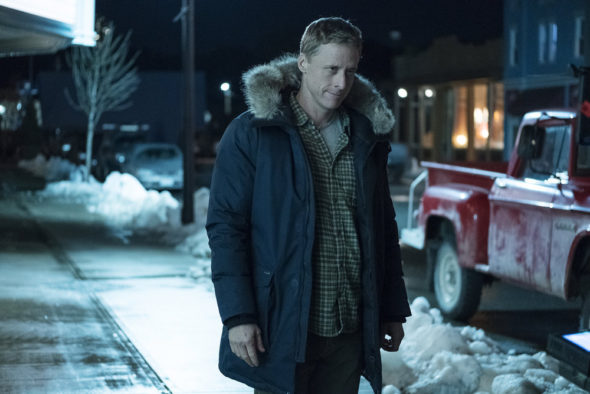 At one time, Syfy had numerous original scripted series but, over time, they’ve gotten rid of most of them. Will this new Resident Alien series have a long life or, will it be cancelled too? Will it be renewed for season two? Stay tuned. *Status Update Below.

Note: The series premiere was simulcast on USA Network and attracted a 0.12 in the demo with 450,000.

What do you think? Do you like the Resident Alien TV series on Syfy? Should it be cancelled or renewed for a second season?

Love this show! Brilliant! Please renew for next season.

A KEEPER ! My wife and I really like this show and look forward to seeing it each week. Finally, a refreshing adult show. Keep it going. What the alien comes out with unexpectedly is hilarious.

Best new show in years. Reminds me of northern exposure. Love it

One of our favorite shows. We are always amazed at the twists and look forward to watching it each week.

I LOVE-LOVE- LOVE this show…!
It’s one of the funniest, most creatively written shows I’ve seen since I don’t know when!
Only a bunch of bean-counting corporate FOOLS would cancel this show.
It seems that “the suits” never even give the best shows a chance to catch on anymore!

Good show. I’m sure the idiots at Syfy can’t wait to cancel it.

best show on tv at the moment,great actors and some brill one liners!Please don’t cancel!

You have to keep this show it’s the best sci -fi since MorK & Mindy meets twin peaks meets Due south meets norther exposure. You have the legend that is Alan Tudyk. A story about Native american s which is warming. comedy with odd sarcastic skit but a story about an alien not so friendly. please please! don’t cancel this show.

As you know that this has been a difficult year, lockdowns, riots and political BS. And most all other shows with hidden political agendas. Hence nothing to watch on TV, So when channel surfing I found your show Resident Alien, very cheesy soap opera ish, but was the most welcomed viewing in this house, it was funny entertaining a pleasure to watch and a great distraction, thank you. I hope that it can be purchased on DVD at some time in the future.

Please don’t cancel one of the few shows I look forward to every week. Resident Alien is a joy to get invested in and I hope it returns for at least another season.

Pilot? Hilarious. I hope it keeps it up.
One quibble:
A spaceship capable of interplanetary travel gets taken down by a lightning strike? I don’t think so!