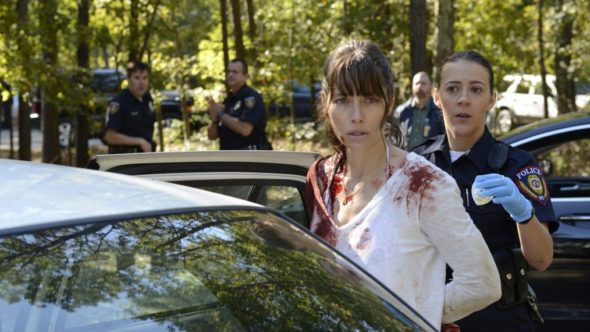 The Sinner just finished its first season this week, but will there be a second? Recently, showrunner Derek Simonds spoke with The Hollywood Reporter about the future of the USA Network TV show.

In the interview, Simonds revealed there are talks of a second season for The Sinner but the story will be different if USA Network renews the series:

There’s certainly been a lot of conversations. We can’t confirm anything right now, but we’re definitely considering ways of … this will always be an anthology series of sorts in which every season will be its own free-standing mystery that is completed by the end of that season. We’ve always had this structure in mind, we don’t quite know what form it would take in terms of who would move on to another season or not. And, like I said at the start, we can’t confirm that a season two is actually happening yet.”

And what are the chances of a renewal? Simonds says the odds are high:

The show’s been very successful for USA and critically as well, so everyone is really, really happy with the performance. We think it’s a possibility, but I can’t really say anything more than that just because I just don’t know the answer.”

What do you think? Did you watch The Sinner? Would you watch a second season?

The ending confused me…..when the Detective had his hand on the steering wheel with thumb up, watching her being transferred from court to go to a mental facility. What did that mean?

I love a good mystery this show had it I sure hope there is a second season the actors were great I held my breathe wondering what was coming next, we have so few good stories like this please do another season.

Would love a second season

I loved the series and hope there is a second season. Very good show

Loved it. Hope there is.

I am looking forward too a second season of sinner.

Would totally watch a second season!

It didn’t quite have enough that was gripping to make me think about a new season and I can’t really see how there could be one unless there is a fresh story line that would not involve the main cast.

How about the entire part of the story where her memory is completely blanked to go along with the heroine scars on both her arms?? I think that’s a good enough plot hole that can be explored.

I loved it! I stumbled across it after the season was over ON DEMAND it was so good I watched all the episodes back to back til 3 in th morning. I hope it comes back because I will be sitting there watching it every week biting my nails waiting to see what will happen

I watched the whole season and found it gripping. The actors and actresses were all very good. Will be looking forward to a season two!

Awesome show! Love Jessica Biel & Bill Pulman. Christopher Abbott not too hard on the eyes either. For any GOT fans he kind of reminds me of John Snow. Definitely would like to see it renewed.

Really liked the show but definitely a new storyline

New case with Pullmans character returning would be good