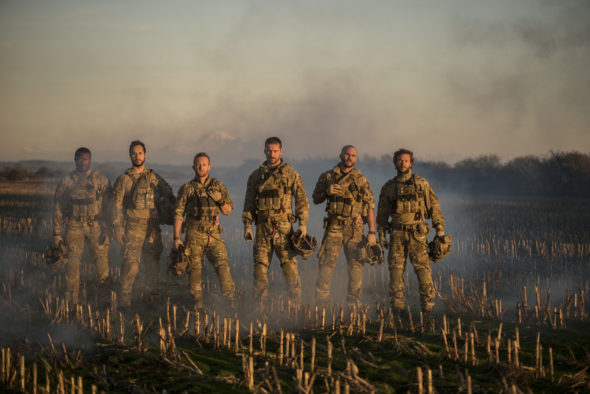 What is the fate of Navy SEAL Team Six? Has the Six TV show been cancelled or renewed for a third season on History? The television vulture is watching all the latest cancellation and renewal news, so this page is the place to track the status of Six, season three. Bookmark it, or subscribe for the latest updates. Remember, the television vulture is watching your shows. Are you?

The second season of Six averaged a 0.19 rating in the 18-49 demographic and 755,000 viewers. Compared to season one, that’s down by 51% in the demo and down by 52% in viewership. Find out how Six stacks up against other History TV shows.

Will History cancel or renew Six for season three? The ratings are way down year-to-year so I think Six will be cancelled. If it is renewed, I believe it will be because History wants to keep it around to continue to establish the channel as a home for original scripted dramas. For now, I’ll keep a hungry eye on the Nielsens and update this page with breaking developments. Subscribe for free Six cancellation or renewal alerts.

What do you think? Did you hope the Six TV show would be renewed for season three? How would you feel now that History has cancelled this TV series, instead?

Six is an excellent show. It needs to be renewed. Love the original shows on history.

Why cancel an excellent show? It’s not like the History channel is going to replace it with another dancing monkey competition show.

I love SIX and can’t believe History is canceling it after an ending finale like in season two. REALLY??

love SIX, please do not cancel!!!

Badly disappointed, all the good op shows are getting axed! Seal Team, The Brave, Taken, Six. What next, Shooter? UNBELIEVABLE!!

Great show, sure hate to see it cancelled. Hope another network picks it up…need closure on season 2 and more good seasons to follow.

I am so disappointed that six has been cancelled. I very much enjoyed it.

So sad it was cancelled….hope some other network picks it up! Season 2 is even better than the 1st season!

Please keep SIX running!! A lot of people like me are late to jump on the bandwagon! And we love combat drama as well

I just recently got turned on to this show, it’s Amazing. PLEASE DON’T CANCEL IT! You could take the story to SO many places!!!

Six is worthy of staying on the air!Great show, great acting, great storylines! Keep it please!!!!!

The second season is better than the first. IT has more action so far!

Loved the first season till they killed off the main characted rip. Went downhill from there

I disagree, the story line is much deeper. WAY BETTER THAN FIRST SEASON!

SIX jumped the shark when they changed the focus from the missions and brought in Olivia Munn to sex it up. I watched the first few episodes this year and it was just a huge soap opera with gratuitous sex scenes and family drama.

No thanks, and I have deleted it from my DVR schedule.

Yeah, you do that. This she’s story line could go for ever! SEALS can fight anywhere! It’s called variety!