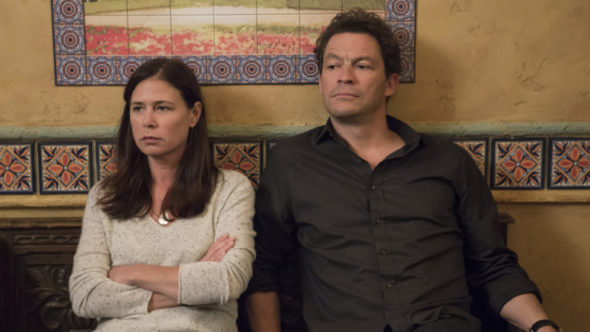 What’s in store for the end of The Affair? Showtime just announced the premiere date for the TV show’s fifth and final season.

The drama series explores the consequences of an affair that destroyed two marriages as well as the crime that reunites the people involved. The cast includes Dominic West, Maura Tierney, Ruth Wilson, Joshua Jackson, and Sanaa Lathan.

The fifth and final season of The Affair debuts on Showtime on August 25th at 9 p.m. ET/PT. Notably, it seems that Jackson will not appear in the final season as he is not mentioned in the channel’s press release.

Season five will chronicle the aftermath of last season’s horrific events and find the characters coming to terms with the consequences of their choices – as they make the realization that if they really want to change their futures, they must first face the past. Helen (Tierney) begins the season involved in an intoxicating new affair with a charismatic movie star (guest star Claes Bang), who offers to give her everything she’s been missing. Noah (West) meanwhile has to swallow his pride and his jealousy and step in to take care of his family in her absence. But just when things seem to have stabilized, a chance encounter with someone from the distant past sets in a motion a sequence of events that brings them both to their knees. Paquin stars as Alison and Cole’s now adult daughter Joanie Lockhart, who returns some years in the future to piece together the truth about what happened to her mother, bringing the whole story full circle. In addition to West, Tierney and Paquin, season five series regulars include Julia Goldani Telles and Jadon Sand as Noah and Helen’s children, Whitney and Trevor Solloway; and Lathan, as Janelle, Noah’s girlfriend and the principal at the school where he teaches. Emily Browning, Omar Metwally, John Doman, Kathleen Chalfant, Max Fowler, Michael Braun, Abigail Dylan Harrison and Jake Siciliano will also guest star. To learn more about THE AFFAIR, visit SHO.com and follow on Twitter, Facebook and Instagram. Join the conversation using #TheAffair.”

What do you think? Do you watch The Affair? How do you want the series to end?

I LOVE THE SHOW……CANNOT THINK OF A WAY IT SHOULD END…..I WISH THIS WAS NOT GOING TO BE THE LAST SEASON…….PLEASE CONSIDER HAVING A SEASON 6 ….PLEASE PLEASE PLEASE…..CONSIDER IT !!!!!!!!