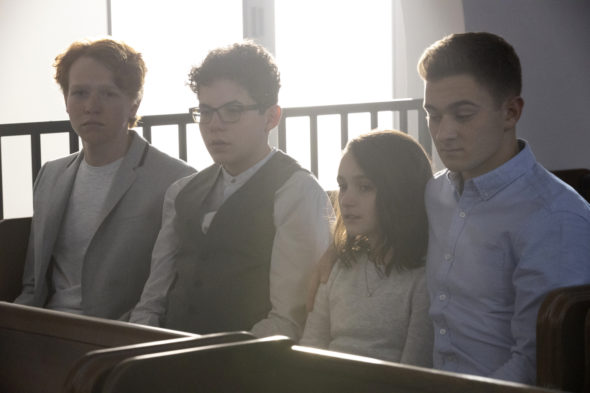 Are you getting the right kind of closure from the fifth season of The Affair TV show on Showtime? As we all know, the Nielsen ratings typically play a big role in determining whether a TV show like The Affair is cancelled or renewed for season six. Unfortunately, most of us do not live in Nielsen households, and our viewing habits and opinions weren’t considered before they decided to end it with this installment. Now, we’d like to offer you the chance to rate all of The Affair season five episodes here.

A Showtime drama, The Affair stars Dominic West, Maura Tierney, Julia Goldani Telles, Jadon Sand, Sanaa Lathan, and Anna Paquin. The series explores the consequences of an affair that destroyed two marriages, as well as the crime that reunites the people involved. This season, everyone must face the past, in order to fix the future. Guest stars include Jennifer Jason Leigh, Claes Bang, Lyric Bent, and Russell Hornsby.

What do you think? Which season five episodes of The Affair TV series do you rate as wonderful, terrible, or somewhere between? Is it ending at the right time? If it were up to you, would The Affair be renewed for a sixth season? Don’t forget to vote, and share your thoughts, below.

I am
Enjoying the show so much. But gutted that Alison & Cole. Have left the show . Plus it’s all confusing with jonnie. But I really enjoy the show. And would love too see a happy ending for Noah & Helen . And if Whitney had children with her Irish husband. It’s missed out so much on half the life . And had gone too the end. .

CM
I think The Affair should continue. It’s a great story everyone can relate to and the characters are perfect . I love watching it and would be so disappointed to see it end. Keep it going.

Please do not end this Show , I love it so much !! If anything ! You could remove this Shasha !!! I feel he has brought the ratings down very much , not only him , A few more new ones that you added to season five , But I know in my heart there is a good storyline behind this television show I beg you please do not remove it , it is a wonderful beautiful TV series I love it very much , , mm

The Affair is a great show, my family and I look forward to it every sunday night at 9:00pm,
its funny these ridiculos 1/2 shows stay on and these soap like shows at night get cancelled it doesnt make any sense … Like The Hotel got cancelled which was also really good

So we are voting to Keep The Affair looking forward to season 6….

Without Ruth Wilson The Affair is pointless. Also, I’m upset with Joanie’s lifestyle as an adult. Why, this, now? Another outstanding actor is Joanie’s father, Cole. Why drop him?
I’ve watched The Affair and Xfinity replays for four years now. Not at ALL happy with season five, episode one. Too bad!

Yes. I love this series. It has caused me to think deeper & differently about important personal things. I would be so happy to continue on for another season if the quality continued as it has for the past 5. It feels as tho the whole story was thought out and THEN made into a series. Everything flowed and made sense. Many shows (Lost) feel like they have a path then suddenly it seems like they just start making it up as they go along. The Affair is excellent cohesive story telling & great character development. I was worried at… Read more »

The Affair is a great show & I have watched it since the beginning – please keep it on & don’t cancel it. So many of the great shows are canceled & this is a keeper for sure!!!