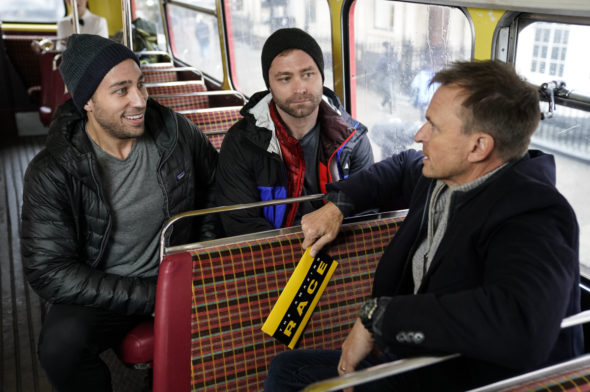 A CBS reality competition series, The Amazing Race TV show is hosted by Phil Keoghan. The competition features 11 pairs of contestants racing around the world in pursuit of a million-dollar prize. In season 33, the globe-trotting teams began their adventure in January 2020, had to stop during the pandemic (the longest pit-stop ever), and resumed in Fall 2021. In their travels, the teams visit places like London, Scotland, Switzerland, France, Greece, Portugal, and Los Angeles. Contestants in season 33 are Akbar Cook Sr. and Sheridan Cook; Anthony Sadler and Spencer Stone; Arun Kumar and Natalia Kumar; Caro Viehweg and Ray Gantt; Connie and Sam; Kim and Penn; Marianela “Lulu” and Marissa “Lala”; Michael Norwood and Armonde “Moe” Badger; Raquel Moore and Cayla Platt; Ryan Ferguson and Dusty Harris; and Taylor Green-Jones and Isaiah Green-Jones.

What do you think? Which season 33 episodes of The Amazing Race TV series do you rate as wonderful, terrible, or somewhere between? Do you think that The Amazing Race should be cancelled or renewed for a 34th season on CBS? Don’t forget to vote, and share your thoughts, below.

This has been my favorite show for many years.

Get ready for the amazing race season 33 perimar.

I love THE AMAZING RACE & I’m so glad it’s back. It’s always been my very favorite show. I can’t afford to travel so this is my way of getting to.