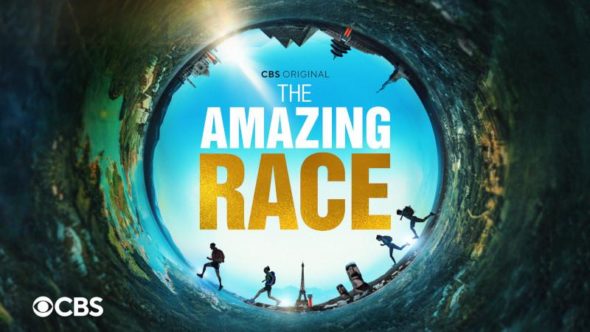 Thanks to COVID-19, there was a big gap between the end of season 32 and the start of season 33. Have viewers forgotten about the travel competition series or, has its long absence just made people hungrier for more?  Will The Amazing Race be cancelled or renewed for season 34? Stay tuned. *Status Update Below.

A reality competition TV series, The Amazing Race is hosted by Phil Keoghan. The competition features 11 pairs of contestants racing around the world in pursuit of a million-dollar prize. In season 33, the globe-trotting teams began their adventure in January 2020, had to stop during the pandemic (the longest pit-stop ever), and resumed in Fall 2021. In their travels, they visit places like London, Scotland, Switzerland, France, Greece, Portugal, and Los Angeles. Contestants in season 33 are Akbar Cook Sr. and Sheridan Cook; Anthony Sadler and Spencer Stone; Arun Kumar and Natalia Kumar; Caro Viehweg and Ray Gantt; Connie and Sam; Kim and Penn; Marianela “Lulu” and Marissa “Lala”; Michael Norwood and Armonde “Moe” Badger; Raquel Moore and Cayla Platt; Ryan Ferguson and Dusty Harris; and Taylor Green-Jones and Isaiah Green-Jones.

3/3 update: You can see the latest night’s ratings in context.

For comparisons: Season 32 of The Amazing Race on CBS averaged a 0.68 rating in the 18-49 demographic and 3.90 million viewers.

What do you think? Do you like the The Amazing Race TV series on CBS? Should it be cancelled or renewed for a 34th season?

Cancelled survivor and this show not same style anymore.

AMAZING RACE has gone way downhill. It was once a great show.