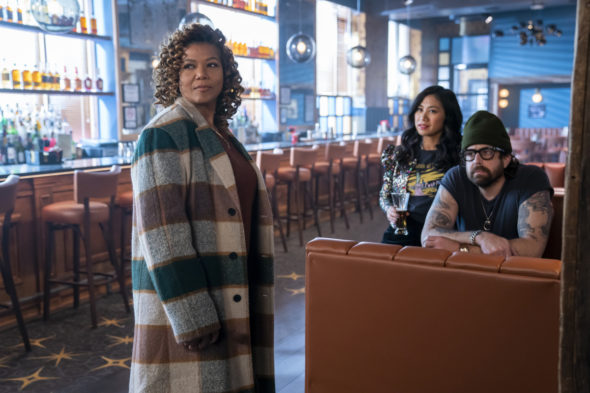 The story follows Robyn McCall (Latifa), an enigmatic woman with a mysterious background. She uses her extensive skills as a former CIA operative to help those with nowhere else to turn. To most, Robyn appears to be just an average single mom who is quietly raising her daughter.

However, to a trusted few, Robyn is “The Equalizer”, an anonymous guardian angel and defender of the downtrodden, who’s also dogged in her pursuit of personal redemption.

Robyn’s clandestine work remains a secret from her smart and observant teenage daughter, Delilah (Hayes), and Viola “Aunt Vi” Marsette (Toussaint), who lives with Robyn to help her balance life as a working mother.

Joining Robyn as champions of justice are William Bishop (Noth), her former CIA handler and longtime friend; Melody “Mel” Bayani (Lapira), an edgy bar owner and a colleague from Robyn’s past; and Harry Keshegian (Goldberg), a paranoid and brilliant white-hat hacker.

As Robyn aids the oppressed and exploited, her work garners the attention of shrewd NYPD Detective Marcus Dante (Kittles), who doggedly seeks to uncover the identity of the vigilante known as “The Equalizer”.

What do you think? Do you like The Equalizer TV show? Do you think it should be cancelled or renewed for another season?

I really like The Equalizer with Queen Latifa and I hope it will NOT be canceled.

I’ve watched the original Equalizer with the british guy, I watched Denzel in the 2 movie versions. What I liked about the idea of an ‘equalizer’ was being able to call somebody other than the police to resolve with a life-threatening problem. I love the Queen. I loved the movies (“Set It Off” is a particular favorite of mine) and the comic series, she’s been in. I think they should have considered the Black woman who was was Zena’s counterpart (Gina Torres) from Suits and Pearson except she’s in 911 Houston for the role of equalizer or how about Jennifer… Read more »

I wasn’t sure about the show, I didn’t really see how Queen Latifah could pull off a role like this (i love her, don’t get me wrong) but she’s great and I’m really liking the show, I hope it doesn’t get cancelled.

Please cancel this before it ruins the Equalizer franchise. Ms. Latifah is definitely not an action star nor a leading character. She is a good for comedic relief and a good supporting actor. Stick to your strengthens.

Loved this program. Queen Latifah was great! I really hope it will get renewed for another season!

I loved the show. I have been a fan of all 3 versions of the show. I even watched the first one. Queen Latifah was great in the role. I’m a fan so I hope it stays.

Queen Latifah in this series didn’t exactly float my boat.

Well,Nothting
Against the Queen ,But I watched the tv series and the movie And the fight scene in the beginning kind of gave the buildup a flat oh well another reboot even with a female , twist it didn’t grab me putting it in front of a lane superbowl didn’t do it justice either

How the hell are we supposed to watch this when we record it on a DVR and half of the show is pre-empted because of the stupid Football going into overtime. I wanted to watch The Equalizer not Superbike. You need to show it again.

Loved the action, Queen Latifah if a joy to watch. Don’t cancel

A very good show It should be renewed. And they should let the people vote not the Nelson family but people of America this is 2021 not 1970.