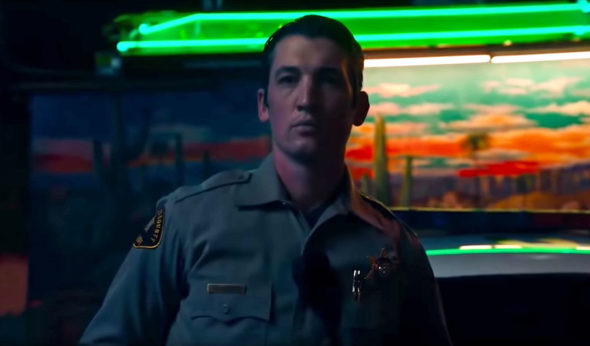 Do only the good shows die young? Gritty crime drama Too Old to Die Young has been cancelled so the TV series won’t have a second season on Amazon Prime Video.

The first (and only) season of 10 episodes were released on June 14th and the show got a good reception at the Cannes Film Festival. Series co-creator and director Nicolas Winding Refn said that he really enjoyed telling stories in an episodic format.

At the TCA summer press tour today, the head of Amazon Studios, Jennifer Salke, confirmed that Too Old to Die Young wouldn’t be returning for a second season though it’s been very well received in Europe (where Refn has a strong fanbase). She noted that she’d been texting with Refn this week and he was understanding about the cancellation.

What do you think? Did you enjoy watching the Too Old to Die Young TV series on Amazon? Should this crime drama have been cancelled or renewed for a second season?

It’s a shame ! One of the best tv shows ever!

No second season? Episode 10 was not a conclusion. Crazy not to keep it going.

A lot of I didn’t see it coming scenes. Even the ones that see it it coming where done with good dialogue exchange and or action.

Original, dark, cinematic & intriguing. Why isn’t there a second season?? The stillness only added to the ‘noir’. Do audiences really just want crap like Emily in Paris? Reconsider please Amazon- think of your European subscribers who love weird & wonderful series like this.

Too old to die young is one of the best series since true detective – unbelievable no season 2 although the ending of season 1 is game of thrones – equese !

This was great tv very violent very good tv. I loved it. I immediately looked to see about season 2 and was very upset to learn they werent going to air it. I love david lynch and this had a little bit of that kinda directing there loved it . I thought miles did a out standing job in it

I am extremely upset by this news because this is one of the best and most beautiful shows that I have ever seen! NWR is a true artist and master of cinematography 🙂 Too bad the mass population can’t understand why he chooses to have long scenes. It’s because each shot he chooses to shoot is so gorgeous that it’s actually nice to mesmerize and take it all in, plus it sure sticks with you long after watching! This show left such a strong impact on me and I’m deeply craving more. There was still so much to be told… Read more »

I thought as a whole it was brilliant, my one frustration/critique would have to be the recurring painfully drawn out pauses they utilized within the cinematography. I would find myself cringing at the amount of dead air that really didn’t appear to actually have any context/value (ie foreshadowing etc). Outside of that though I must say I really enjoyed it.

God no…it was awful. 8 hours of my life I won’t get back. Yea I couldn’t finish it.

I loved this show!! I’ve been stalking Prime Video to see season 2. It’s dark, intelligently funny at times, outrageous and yet so plausible. There is and has not been any show like this. I truly hope they reconsider.

Nothing like it. Visually stunning. A masterpiece of acting, script, and subtleties. It’s not an easy watch. But this is why it is so vital to have in one’s repertoire. The future of cinema cannot grow without shows like this. Nicolas Winding Refn the master of light and colour brings his signature style and is not afraid of touching on the themes we all know about but never talk about. The younger generation must have a dynamic understanding of what is brilliant and what is dog-****. So I can understand why there is no second season. Too hot for tv.… Read more »

Great series why not a second season ? Makes no sense at all !

I have the feeling that the new head of Studios is steering Amazon into becoming a smooth, boring, politically correct Disneyesque platform with her choices

I think that the greater issue with Amazon, Netflix and others is that they are producing way too many shows that don’t allow for the build up of a loyal base of fans.

With Netflix losing subscribers due to continuing price hikes, let’s hope that there is a lesson to be learned from overkill.

What a croc. People don’t know good TV when they see it.