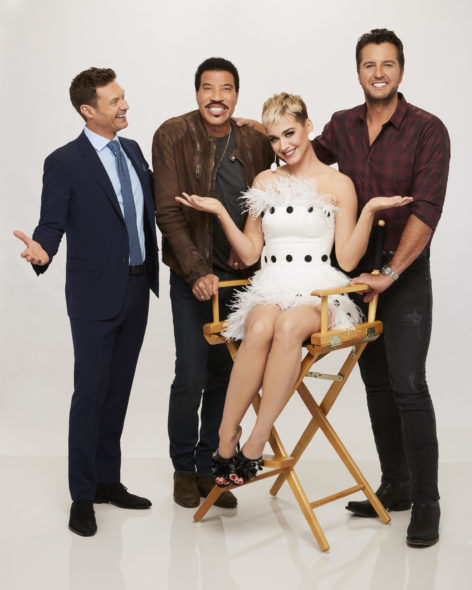 The Alphabet Network continues to make its mark it the music business. ABC has renewed the American Idol TV show for its second season — the series’ 17th, overall. Although Idol is still largely the same show it was during its first 15 seasons on FOX — right down to host Ryan Seacrest — live performances and eliminations happen on the same night now, and the show is back with brand new judges and a new nationwide live voting setup.

An ABC reality TV show competition, American Idol is judged by Lionel Richie, Katy Perry, and Luke Bryan. Contestants are competing for the “American Idol” title and a recording contract.

American Idol: A Look at the Ratings

The second night (Monday) of season 16 is averaging a 1.57 rating in the 18-49 demographic with 7.62 million viewers. Compared to the 2016 Thursday editions on FOX, that’s down by 27% in the demo and 16% in viewers. Find out how American Idol stacks up against other ABC TV shows.

Music Luminaries Luke Bryan, Katy Perry and Lionel Richie to Return as Judges, and Ryan Seacrest to Return as Host

The journey continues as America’s beloved singing competition series “American Idol” is set to return for its second season on The ABC Television Network for the 2018-2019 season. Following the historic revival of the beloved series on ABC, the fan favorite will set out once again on a nationwide search to discover the next singing sensation. Returning to help find the cream of the crop are music industry legends and all-star judges Luke Bryan, Katy Perry and Lionel Richie. Emmy®-winning producer Ryan Seacrest will also return to helm the music competition series as host.

“We knew that ‘American Idol’ on ABC would unleash an opportunity for singers from all walks of life to realize their dreams and that these incredible contestants would have America rooting for their success,” said Channing Dungey, president, ABC Entertainment. “I am thrilled that Katy, Luke, Lionel and Ryan will be back to once again embark on this Idol journey with us to discover the next crop of inspiring talent.”

“’American Idol’’s return on ABC has shown once again that viewers love to discover and support raw talent,” said Trish Kinane, president of Entertainment Programming, FremantleMedia North America, executive producer and showrunner of “American Idol.” “Our new judges Katy Perry, Luke Bryan and Lionel Richie have brought huge credibility, energy and fun to the show this year, and we are so excited to continue the journey with Ryan Seacrest at the helm in the search for the next superstar.”

Dennis Miller, executive chairman of CORE Media Group, added, “Our team is incredibly proud of the success we have had with ‘American Idol’ on ABC, and we are excited to search for more talent nationwide with a second season. We look forward to furthering our relationship with the network, our partners at FremantleMedia, Luke, Katy, Lionel, Ryan, and all those who audition to become the next American Idol as we continue to entertain fans with incredible performances week after week!”

The official “American Idol” app is available on iOS and Android devices. Using the app, fans can vote for their favorite contestants, as well as on AmericanIdol.com/vote or via text. Fans can also use the app to “IDOLize” their selfies with “American Idol” filters and stickers, and track what’s trending with judges, contestants and fans.

What do you think? Are you a fan of the American Idol TV show? Are you glad it’s back on the air. Do you plan to check out next season? Sound off in the comments.

I think the talent is much better than the Voice

Seen enough of this show…i think it has run its course.

Best it’s ever been. Love the new Judges, and let’s not forget Ryan Seacrest. The show is better than ever. Way to go ABC for renewing it for another season. May it be so for many more to come.