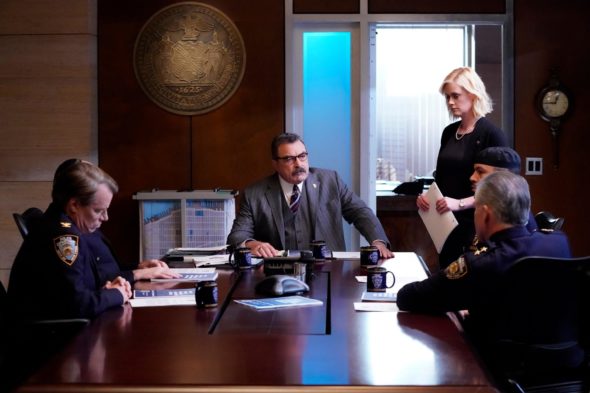 What’s in store for Blue Bloods? Recently, star Tom Selleck spoke with TVInsider about the future of the CBS TV show and the season 10 finale.

In the interview, Selleck teased Blue Bloods‘ season 10 finale, which airs on CBS tonight, May 1st, at 10 p.m. ET/PT:

You know me, I don’t like finales when they say someone’s going to die or that it will have a sensational event or bigger explosions. It isn’t any of that, but it is a quintessentially Reagan story; a deeply personal one for Frank, which turns into having an enormous impact on every single Reagan on the show.”

Specifically, Selleck warned fans the finale will be a tearjerker:

I don’t expect a dry eye in the house. I got emotional when I saw a cut of it; so did my wife, who’s seen a working copy of the episode. The impact on everybody is just hugely significant. I think it’s important. Frank’s arcs usually involve a dilemma, but in this case, it’s not just his job. It’s personal and goes to the heart of what Frank has always carried inside of him. The audience really knows our characters, and the story unfolds beautifully.”

And what about season 11? CBShas not yet announced a renewal so what are the chances? Selleck says:

Well, I’m negotiating with CBS about next season. I’d like them to order two seasons. We can do much betters shows if we know where we’re going. This show has lasted because the characters have been allowed to grow and change. The potential is limitless in my opinion. The cast seems to love each other; I sure love them. The actors are doing phenomenal work. Everybody’s very much aware that this is maybe a once in a lifetime opportunity—a show that’s found its way and is welcomed by an audience. I’m ready to go back when it’s okay to start again.”

What do you think? Do you watch Blue Bloods? Do you want an 11th season?

Please please keep Blue Bloods going for a few more seasons. I would like to see Jamie & Eddie have a baby.

We really love Blue Bloods! Absolutely one of the finest shows on TV! Please renew for 2 seasons so we can all see how good families live.

Oh, heck yes! I look forward to this show every Friday night, even when I go on vacation, or even when using my RV. I change my plans to never miss an episode.

This show has been very well done week after week and Season after Season. The family bonding and interplay ON Set and OFF Set is wonderful and entertaining. At a time when we are thanking First Responders, Healthcare workers and Volunteers, the Blue Bloods story lines and subject matter fits with America in the challenging 21st Century. “Everyone” wants the series to continue – – Viewers, Sponsors and the Cast Member! Don’t get hung-up and fooled by analytical short-term trends. Ensure that the writers continue to do what they have done so well for so long – – write on-target… Read more »

It’s truly one of the best shows on TV and I truly hope CBS renews as their programming has not been up to par. I’m totally stupefied by all of these mindless reality shows. So, Blue Bloods, Seal Team, FBI these types of shows are something our household enjoys.

Love this show! Hope it continues!

Renew blue Bloods it is the best shows your station has

Please give Blue Bloods 2 or more seasons! It is a great show?

Please renew Blue Bloods for the next three seasons. The group of actors are wonderful.

I adore this show and would definitely watch more seasons. I would be bereft if it ends tonight. It feels like my own family and there is so much wisdom about people in this show.

Best show and cast on tv. Sure want another season.

It has been and is one of the best programs on the air. Look forward to watching every week. ALso still watch reruns. Almost like they are family. Please do more seasons!!!

YES!!! Please do another season!!!!! We LOVE the Regan family.