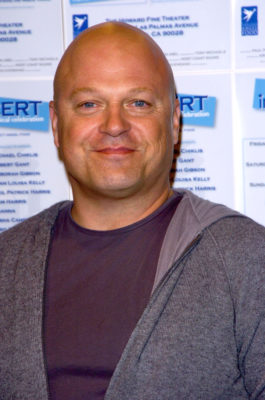 The drama series follows “Ben Clemens (Chiklis), who after 32 years as a border patrol agent, is forced to work for the very people he spent his career trying to keep out of America.”

Paramount Network has ordered 10 episodes of Coyote. You can read more info below:

Coyote is the story of Ben Clemens (Chiklis), who after 32 years as a border patrol agent, is forced to work for the very people he spent his career trying to keep out of America. Now exposed to life on the other side of the wall, Ben will start to question his black and white views of the world, challenging his ideology and his loyalties.

“David Graziano, our whole creative team, and I are excited to make a show with Paramount Network and Sony that will dramatize a conversation between Mexico and America,” said MacLaren. “I have wanted to work with Michael Chiklis for a long time and am thrilled he is playing such a complex character whose journey will expose multiple points of view on this relevant and complicated issue.”

“We’re honored to work with Michelle MacLaren, Michael Chiklis, David Graziano and the rest of the gifted creative team on Coyote,” said Keith Cox, President of Development, Paramount Network and TV Land. “The powerful, timely setting and complex characters are a perfect fit with the rest of our growing scripted slate. Coyote is befitting of the strong Paramount name.”

“We are incredibly excited to be working with this creative powerhouse of a team and beyond thrilled to have Michael Chiklis back in our SONY family,” said Jason Clodfelter, Co-President of Sony Pictures Television.

“While most of our shows and movies come from our own library, in Coyote, we found an original idea and character that were undeniable and attracted this incredible creative team,” said Mike Richardson, Dark Horse Entertainment’s President and Founder. “We are genuine fans of Michael Chiklis and Michelle MacLaren, and we couldn’t be more excited about this show.”

The series order comes on the heels of the recently announced 10-episode greenlights for Paradise Lost (working title), from Rodes Fishburne, Arika Lisanne Mittman and John Lee Hancock, and 68 Whiskey, from Ron Howard and Brian Grazer’s Imagine Entertainment, as well as the new Darren Star series, Emily in Paris starring Lily Collins. Paramount Network’s scripted roster is headlined by hit series Yellowstone, which recently debuted its second season and is the most-watched original cable series of the summer.

Keith Cox and Lauren Ruggiero, Vice President of Development for Paramount Network, will oversee Coyote for the network.”

What do you think? Are you a fan of Michael Chiklis? Will you watch Coyote?

I am so excited Michael Chiklis will be returning to television! I think it’s gonna be a great show! Please let us know ASAP the air date.

I have watched Michael Chiklis since he first starred as the Commish. He is very talented and his last show The Shield was powerful and believable. Great choice for the role. Political or not it will be worth the watch.

I am a big fan of Michael Chiklis & am looking forward to coyote. Would like any info on when it will start. I see from other postings some have made up their minds on what it will be with out watching one episode to check it out. That is sad.

Absolutely not. This sounds like a political show trying to justify illegal crossings. We don’t need anymore political shows. I watch TV shows to escape the insanity of political BS.

Love this type of show and love the main actor

When will the series start. Pls let me know when it will starts.