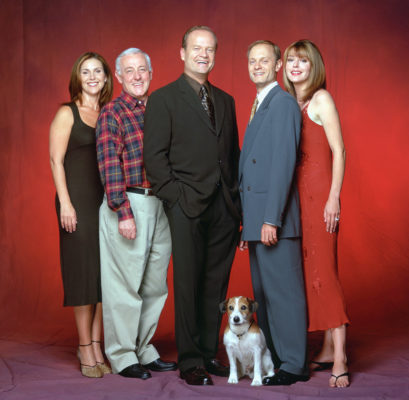 Is Frasier coming back? Deadline reports Kelsey Grammer has an idea on how to revive the NBC TV show.

During a recent panel commemorating the 25th anniversary of Frasier, Grammer revealed he wants to revive the NBC sitcom if a good idea comes along:

There has been some discussions; nothing is planned; There is nothing set in stone. In my own personal approach to what I’ve discussed with other people is that I wouldn’t want to do it without these guys.”

Mahoney passed away in February of this year.

What do you think? Are you a big fan of Frasier? Would you watch a revival?

I would absolutely love to see a revival of Fraser !!!

Charlene Jones…yes the show Frasier needs to be brought to life again..the fans also need to remember one of the original producers and writers of Frasier..wings and cheers was Mr David Angell a pax on flight 11 with his wife Lynne on September 11,2001..I am a flight attendant out of BOS Logan international airport and they were my paxs..I was on vacation that day but my heart flies with my crewmembers and all the people who were taken from us..so Frasier will be missing a special Angell on the earth but now on heaven..what a wonderful way to honor Mr… Read more »

Please bring “Frazier” the radio talk show back as it was.
They could do a tribute to their father Marty that passed away…Frazier could move back to Seattle for that, and get rehired at the station.
Bring back as much of the cast as possible.

Honestly, I still watch the reruns to this day. It is the only funny & light show worth watching. Just saying…

In my opinion, I felt that Frasier never ended! There was always the anticipation of what was next. Frasier has a son ‘Freddie’, we never saw him grow up. Miles and Daphne were married, we never witnessed them in a ‘home’ environment side line. Lilleth was due to get married herself having asked Frazier’s permission shortly after they both returned from their shock vacations to Bora Bora. It would have been nice to see that play out. Roz had a daughter, whom we never saw grow up. Perhaps a great, yet sad push off for the show to return would… Read more »

I definitely would watch! I have old favorite episodes of FRAZIER recorded and watch them regularly. They beat most of what is on TV these days. It would be sad and not the same without his dad, but Niles was always my fav, and if Roz and Daphne are there it will be fun!

Frasier was, and continues to be, one of my all-time favourites. I would love to see the show return, perhaps picking up from his finale trip to Chicago, where we believe he’s going after the professional matchmaker, but he returns to Seattle (sadly, for Martin’s memorial) married to Mercedes Ruehle (“Dirty Girl ), who had previously moved there. They decide to retire in Seattle, possibly take over Cafe Nervosa, and continue to match wits and chemistry. Frederick, now grown, is also a professional therapist, with his dad as his mentor and comical patients. Niles and Daphne now have grown children,… Read more »

Patsy
Reply to  L B Johnson

I would love to see it. It was one of my favorite sitcoms ever. Of course, you don’t just need to get the actors back, you’d have to get the writers or their equivalent (if writers that good still exist- – Most sitcoms lately really pale by comparison). Good luck! I’ll be delighted to see it again!

Yes I would watch it. I really enjoyed it when it was on, plus have their DVD’S