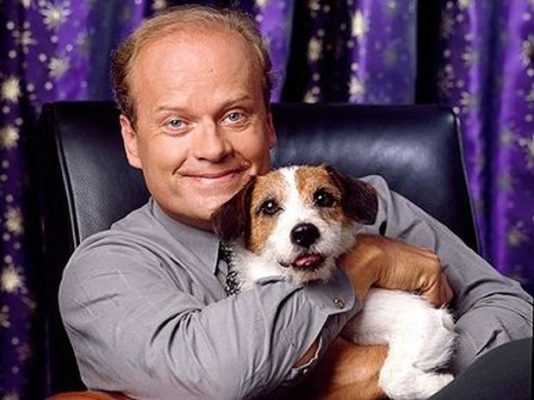 Could Frasier be making a comeback? Deadline reports Kelsey Grammer and CBS TV Studios are discussing a possible revival of the NBC TV show.

Although nothing official has been announced, Deadline reports Grammer is meeting with writers to develop concepts for a Frasier revival. Few details have been released, but the possible series could see Frasier Crane in a new city with new characters.

What do you think? Are you a fan of Frasier? Would you watch a revival?

Loved the show. Would be great to bring it back.

I’m a huge fan of the show, I watch the reruns all the time. That being said, I would love to see the show come back, but they would have to have all the characters back, it’s all of them that made the show such a huge success.

I would give it a try. However, it was a great cast in the original Frasier. It’s hard to imagine a revival of Frasier without at least some of the original cast. But Grammer is talented. It depends on how talented the writers are.

Kelsey Grammer is more than capable of carrying a television show as Dr. Frasier Crane in any capacity. If he were to provide a guest appearance for an episode on any show on television today, it would likely be the most watched episode of the season. I hope he gets the deal done.

Just won’t be the same without John Mahoney. Even if David Hyde Pierce came back, they’d be left with no balance. So much was provided by Marty being the perfect fold for Niles and Frasier.

I miss “Frasier”. I’d love to see it come back, in whichever form is possible.