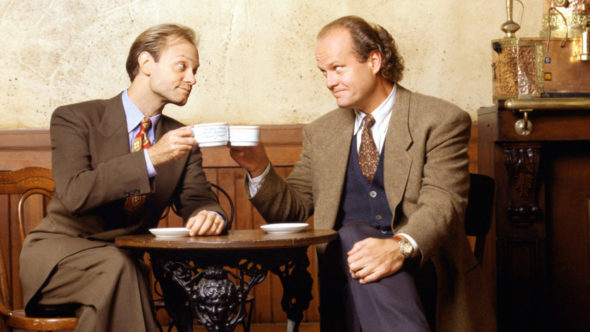 A spinoff of Cheers, the hit sitcom followed Dr. Frasier Crane (Grammer) as he settles in his hometown of Seattle with his father and younger brother, Niles (David Hyde Pierce). The cast also included Jane Leeves, Peri Gilpin, John Mahoney, Moose, Enzo the Dog, Dan Butler, Tom McGowan, and Edward Hibbert. The series ran on NBC for 11 seasons before ending in 2004.

Speaking with People, Grammer revealed he is listening to pitches for a Frasier revival and an announcement should be made within the next month or two.

What do you think? Are you a big fan of Frasier? Would you watch a revival?

I would love to see a reunion. Niles and Roz were hysterical

I never tire of watching Frazier and a series
comeback would be wonderful.

Loved the Frasier series and would definitely watch a revival. I thought the series had a few or more good seasons left. Unfortunately John Mahoney passed and he was such a integral part of the show and it’s success.

YES! for sure my boss and me watch Fraiser every day on COZY , my boss is 91 and watching Fraiser is highlight of day and looks forward to that time.

I’m 29 and I watch on cozi TV every day! I grew up watching it with my parents. It’s always funny

Please bring it back . I love the show. I own the whole series. I also record episodes on Hallmark. I will miss Martin and Eddie very much.

I love the show. I watch reruns each night. Yes I would love it to come back.

I watch several episodes of Frazier, via Netflix, every day. (I also leave it on the TV in the background or on my cell phone, while I clean house.)
My sisters and our mom are also addicted to this hilarious show!! The show’s writers, actors and actresses are brilliant. This show and it’s characters always put us into a good mood!!! I really hope some new episodes will be made!!! We’ll be waiting and watching, for sure!!!

Yes, bring back Frasier. To bad Martin want be a part, he will be greatly missed. I wanted to know what happened to frasier in the last episode. Did he run into “Dirty Girl ” before looking up the matchmaker. Niles and Daphne did they have more kids. Ronnie how she doing and Frederick, is he married with children. Brink back frasier.

Yes!! Frasier is my favorite show of all time. I still watch it every night practically!!!!

100% I would as long as it is Frasier Roz Niles and Daphne all the originals and they still have their same intelligent wit I am there! Itll be different without Martin of course he added so much to the show… I watch Frasier every night before bed and during the day on weekends and have done so for yours. Please bring it back!!!

Loved the show. happy to watch many more series of this