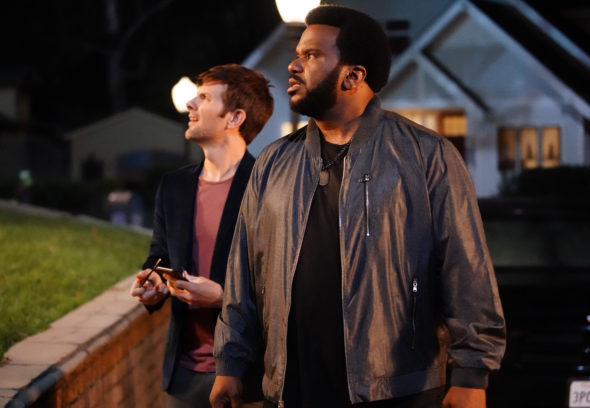 Do Leroy and Max survive their stint with the Bureau Underground? Has the Ghosted TV show been cancelled or renewed for a second season on FOX? The television vulture is watching for the latest cancellation and renewal news, so this page is the place to track the status of Ghosted, season two. Bookmark it, or subscribe for the latest updates. Remember, the television vulture is watching your shows. Are you?

Airing on the FOX television network, Ghosted stars Craig Robinson, Adam Scott, Ally Walker, Adeel Akhtar, and Amber Stevens West. Captain Ava Lafrey (Walker) orders the abduction of ex-LAPD detective and current mall security guard, Leroy Wright (Robinson), and former Stanford astrophysics professor and current bookstore clerk, Max Jennifer (Scott). She then recruits them to work for a secret governmental agency known as the Bureau Underground. Along with weapons and tech expert, Annie Carver (West), and unidentifiable evidence expert, Dr. Barry Shaw (Akhtar), it’s up to Barry and Leroy to save the world from all kinds of unusual threats including cryptids, extraterrestrials, and the paranormal.

The first season of Ghosted averaged a 0.84 rating in the 18-49 demographic with 2.16 million viewers. Find out how Ghosted stacks up against the other FOX TV shows.

Although it premiered to positive ratings, the numbers have fallen quite a bit. Though FOX says that a decision has not been made about Ghosted‘s fate, it seems highly unlikely that this sitcom will be back for a second season. I’ll update this page with breaking developments. Subscribe for free updates on any Ghosted cancellation and renewal news.

6/28/2018 Status Update: Ghosted has been cancelled by FOX. Details here. The dinner bell is ringing.


What do you think? Did you hope the Ghosted TV show would be renewed for a second season? How do you feel, now that FOX cancelled this TV series, instead?

I love the show!! It’s hysterical! The cast is awesome! Please keep this show.

Absolutely love this show, please keep it going !! Would really hate for this to get cancelled. Max and Leroy make a great team.

To skylar, why do you keep saying that? Even if they cancel Ghosted (which I hope they do NOT as I love the show) that does not mean that they will renew Last Man! And if you don’t like the show, then just don’t watch it!
Wishing something canceled that other people love, just because you choose not to watch it is just plain spiteful. How would you like it if I said cancel Last Man on Earth because *I* don’t watch it?

I say Cancel this show and keep The Last Man on Earth going.

Please, do not cancel this show. I really enjoy all the characters and storylines. I couldn’t wait for the next episode.

Love the show, my kids watch it as well. Now they when the new ghosted? Hope renew horrible if canceled.

I love ghosted I been waiting for a new show . I’m vary disponted. My family loves that show

love this show,would be a shame if they dont renew it,

Love the show.. This is the ONLY show I really watch on fox so I won’t even watch the network of they drop it.. Maybe the occasional football game.

Love the show both funny talented actors who have great chemistry. Would love for it to get a Season 2!

I love both of these actors so much I would hate to see this canceled. It has the makings of a very funny show with their on screen comic chemistry. I hope it stays around.

If every cold open began with a heist or a chase or takedown for every single episode like it did for episode 6 it would become a thing. Kind of like Wendy Williams and her “How you doin-Say hello to my cohosts type thing.” Ghosted needs a formula. I think an action packed cold open every episode would set it apart in a big way and would cement it’s place in any timslot

I love both main characters, and the writing can be not terrible at times. But the subject matter they’re working with is being approached in a very lazy, and dumbed down way. They’re better than this show, and it’s missing it’s mark consistantly from week to week. I say cancel it.

I agree. Cancel this show and keep The Last Man on Earth going.

This show has lazy writing without creativity.