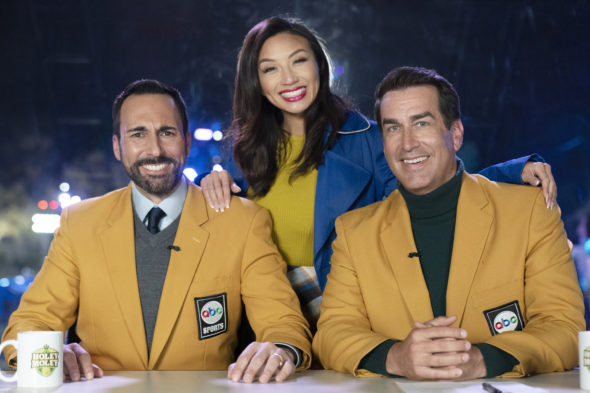 This summer game show didn’t hit “a hole in one” when it came to the ratings but the numbers were certainly good enough for ABC. The network has renewed the Holey Moley TV series for a third and a fourth season. If ABC keeps airing the series during the summer months, that will presumably keep the competition on the air through the summer of 2022.

The second season of Holey Moley (aka Holey Moley II: The Sequel) features self-proclaimed mini-golf lovers from around the country as they compete head-to-head through an obstacle-filled golf course. In each episode, eight contestants put their miniature golf and physical skills to the test as they face off in crazy challenges on the supersized course. The winners of each episode return to the “Holey Moley” course for the all-star grand finale, where only one will be crowned the winner and claim the $250,000 prize. Executive producer Stephen Curry serves as the resident golf pro, with Rob Riggle on color commentary, Joe Tessitore providing play-by-play, and Jeannie Mai as a sideline correspondent.

Airing on Thursday nights over the summer of 2020, the second season of Holey Moley averaged a 0.60 rating in the 18-49 demographic and 3.35 million viewers in the traditional ratings. Compared to season one, that’s down by 12% in the demo and up by 4% in viewership.

What do you think? Do you enjoy the Holey Moley TV show? Will you be watching seasons three and four on ABC?

Love this show…Can hardly wait to see it again. Very funny and creative..Carol

This is the most hilarious show on TV. Please bring it back. It is a perfect distraction from the insanity engulfing our country. Kudos.

We LOVE Holey Moley and cannot wait to see it again. We will definitely be watching

Our granddaughter told us about the show and after one episode, we were hooked. Very fun and funny. Best clean entertainment for a family to watch in a long time.

My golf league is on Thursday nights. Look forward to coming home after nine holes and enjoying a round of holy moly!!

We love Holey Moley. So much fun.

Forward to every episode. Announcers add so much t

I look Forward to every episode. Announcers add so much to the entertainment value

We looked forward to this show each week. Brought fun into our home. Perfect bit of bona-fide competition, blended with the goofiness of the outrageous holes and comedic brilliance of the hosts. Can’t wait to see more.

We watch this virtually with our grandchildren. We all love this show

I see that it didn’t do as well in the ratings with the 18-49 demographics, but what about your real fans (50 & over)? In my house we never miss this.

Rob Riggle and Holy Moley has been a breath of fresh air for clean comedy on tv! We never miss it and will watch every future episode.

a great show funny as hell and a good competitive game