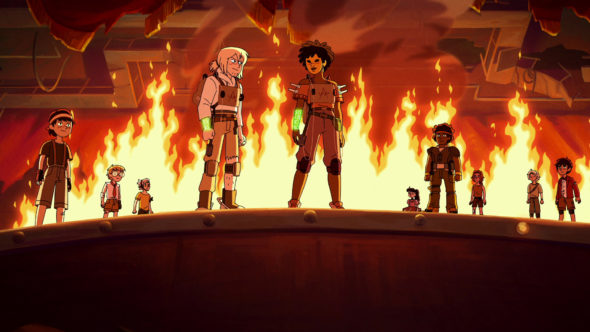 HBO Max has a lot of animated programming in the works. The streaming service has renewed the upcoming Gremlins TV series for a second season (in advance of its first season debut) as well as ordered season four of Infinity Train (above), season four of Craig of the Creek, and season three of Victor and Valentino. In addition to a trio of Ben 10 specials, which will be released in April, HBO Max has also ordered new series Jade Armor and Total Drama Island.

The streamer is also developing several new projects, many of which are based on familiar properties — The Amazing World of Gumball Movie (based on the British-American surreal comedy series), Family Mash-Up, Gross Girls, Teen Titans Go! The Night Begins to Shine (a superhero spin-off series), and Tweety Mysteries (a hybrid live-action/animated series featuring the animated Warner Bros. character).

There aren’t any release dates for the greenlighted projects but here are more details:

Burbank, CA – WarnerMedia Kids & Family unveiled today an expansive content commitment that aims to appeal to the complete spectrum of kids and families including preschoolers, all kids ages 6-11, and family co-viewing, creating more than 300 hours of original series, specials and acquisitions that will debut on its global Cartoon Network channels and HBO Max beginning later this year. These new originals add to the over 3,000 hours of premium library content also coming to all of WarnerMedia’s platforms.

“After 100 years of creating some of the world’s most beloved IP, today we’re at the beginning of our new story, with the history, corporate unity and modern approach to be the industry leader our heritage deserves,” said Tom Ascheim, President of Warner Bros. Global Kids, Young Adults and Classics.

Leveraging the historic and rich legacy within the WarnerMedia portfolio and a newly united Kids & Family business group within the enterprise, Cartoon Network was unveiled today as the central Kids & Family brand for WarnerMedia. Additionally, Cartoon Network has reenergized its brand promise through its new tagline, Redraw Your World, which aims to empower kids to feel comfortable with who they are, embrace their uniqueness and believe in their own ability to impact change. To help bring this new brand position to life, Cartoon Network inked its first-ever musician-in-residence deal with 10-year-old viral music sensation Nandi Bushell to create a spectrum of multiplatform content.

“The world can be a pretty challenging place at times, but rather than wallowing in the world we’re given, let’s draw the world we want. At Cartoon Network, we create wildly original and diverse worlds every day and that just may be the inspiration kids need to redraw their own world,” said Tricia Melton, Chief Marketing Officer of Warner Bros. Kids, Young Adults and Classics.

Affirming its promise to appeal to kids of all ages, Cartoon Network announced today its preschool programming block Cartoonito launching this fall and is making a significant commitment to creating more animation and live-action content that appeals to girls and family co-viewing.

“The characters, artists and storytellers that make up Cartoon Network Studios and Warner Bros. Animation are some of the strongest in the industry,” said Sam Register, President of Warner Bros. Animation and Cartoon Network Studios. “While each studio continues in the footsteps of their own proud legacy, they unite with a shared passion to create programming that will draw in audiences of all ages and be the engine that drives WarnerMedia to the top of the kids and family space.”

New series greenlights to reach all kids and families include:

Ben 10 specials – Produced by Man of Action (Big Hero 6, Generator Rex), three 44-minute specials based on the hit Cartoon Network series Ben 10 are set to premiere in April 2021. The first, Ben 10,010, takes place in the future when a disillusioned Ben 10000 is called out of retirement to recruit his 10-year-old version from the past to work together to save a future under siege. The second special, Ben Gen 10 follows Ben as he meets a young Generator Rex on the run from a hostile Providence working through a series of misunderstandings in order to save the world from being infected with alien DNA. In the final installment, Alien X-Tinction, the Tennysons are attacked by a villainous, dimension-hopping Omni-alien, and soon meet a parallel universe version of Max who opens the door to hosting multiple Bens and Gwens, forming an alien hero army to combat this threat.

Craig of the Creek – Created by Steven Universe writers Matt Burnett and Ben Levin, season four of the Emmy-, GLAAD- and NAACP Image Award-nominated series is back and filled with new adventures as Craig and his friends embark on an exciting quest to find one of the Creek’s greatest treasures – meeting new friends and exploring new places along the way.

Gremlins S2 – A season two greenlight of this animated prequel to the beloved film franchise doubles down on the yet-to-be-aired series from Warner Bros. Animation and Steven Spielberg’s Amblin Television. The first season, Gremlins: The Secrets of the Mogwai, is currently in production and features a star-studded voice cast including Izaac Wang, Ming-Na Wen, BD Wong, James Hong, A.J. LoCascio, Gabrielle Green, and Matthew Rhys.

Jade Armor – In production with TeamTO and featuring a talented all-female creative team, Jade Armor centers around the martial arts-loving Lan Jun, an unlikely teenage heroine who must learn the ancient secrets of her family and uncover the unexpected, all while navigating life as a teen.

Total Drama Island – The world’s most hilarious reality show is back and better than ever with two new seasons. With no parents, no phones, and no mercy, the new animated series will introduce an updated cast of quirky, iconic teen contestants as they face hardcore competition, brutal eliminations, and more drama than ever before. Total Drama Island is produced by Fresh TV for Cartoon Network and HBO Max, and distributed internationally by CAKE.

Victor and Valentino – In the third season, there’s something sinister unfolding in Monte Macabre, and Victor and Valentino plan to sniff it out before it’s too late. Along the way, the boys will return to the Underworld for Dia de Muertos, hang out with the Reynas of Los Angeles for a Mariachi musical, and mark Halloween with a harrowing two-part spooktacular special. The series is created by Diego Molano and produced by Cartoon Network Studios.

New projects in development for kids and families include:

Family Mash-Up (working title) – A modern-day The Brady Bunch meets Pitch Perfect when a single mom and three sons and a single dad with three daughters fall in love and get married despite their kids being in two fiercely competing acapella groups. The music-filled live-action comedy is created by Michael Poryes (Hannah Montana, That’s So Raven).

Gross Girls – From Cartoon Network Studios with producers Adam Scott (Parks and Recreation) and Naomi Scott (Other People) alongside creators Daniela Hamilton and Scott Yacyshyn, Gross Girls is a smart, sophisticated animated comedy about Chuck and Zoey, two best friends trying to survive middle school without losing any of their trademark stinky, hairy, mad science-y grossness. In spite of jerky brothers, judgey classmates, and “common decency,” these two girls boost each other up and encourage each other to be 100% themselves. Because with the right best friend, everything is an adventure…even puberty.

About Cartoon Network
Cartoon Network is a division of WarnerMedia and the #1 global animated series network, offering the best in original content for kids and families with such hits as Ben 10, Craig of the Creek, DC Super Hero Girls, Steven Universe, The Amazing World of Gumball, Teen Titans Go!, Victor and Valentino, and more. Seen in more than 185 countries, over 450 million homes and in 33 languages, Cartoon Network inspires the next generation of creators and innovators by engaging its audience at the intersection of creativity and technology. Its award-winning pro-social initiatives, Stop Bullying: Speak Up and CN Buddy Network are acknowledged and often used resources for kids and adults looking for tools that can assist in dealing with the ongoing issue of bullying.

What do you think? Do you like the sound of any of these newly ordered series? Are you hoping that any of the projects in development will be produced?