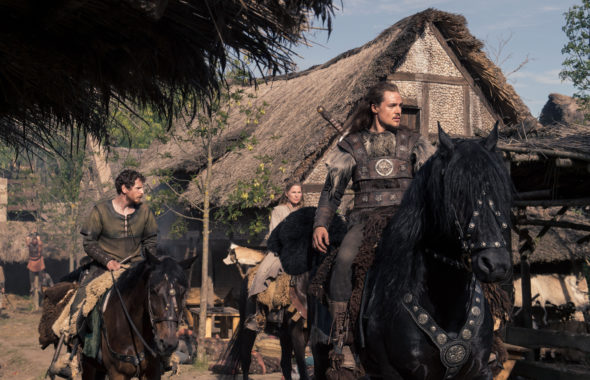 Will Uhtred avenge Ragnar and reclaim his birthright? Has The Last Kingdom TV show been cancelled or renewed for a third season on Netflix? The television vulture is watching all the latest TV cancellation and renewal news, so this page is the place to track the status of The Last Kingdom season three. Bookmark it, or subscribe for the latest updates. Remember, the television vulture is watching your shows. Are you?

Streaming on the Netflix paid subscription platform, The Last Kingdom stars Alexander Dreymon, David Dawson, Emily Cox, Ian Hart, Tobias Santelmann, Thure Lindhardt, Millie Brady, Alexandre Willaume, Julia Bache-Wiig, Joseph Millson, and Peter McDonald. An adaptation of Bernard Cornwell’s novel series, The Saxon Stories, the historical drama follows Uhtred of Bebbanburg (Dreymon), the son of a 9th Century Saxon nobleman. After killing his father, Danish invaders kidnap the boy and he is raised by their warlord, Ragnar. Years later, when Ragnar is killed, Uhtred vows to avenge him, even as he returns to Bebbanburg to claim his birthright.

Unless Netflix decides to release streaming “ratings” it is always difficult to gauge the success of streaming TV shows, like The Last Kingdom. So, let’s look at what we do know. Netflix became a co-producer after the first season ran on BBC Two in UK and BBC America in the US. And in the US, the second season will have its first run on Netflix, leaving BBC America out of the picture. They must have some faith in the project. Provided the show continues to do well in both the UK and in the international markets that get the series via Netflix, I suspect The Last Kingdom will be renewed for season three. Subscribe for free updates on all The Last Kingdom cancellation and renewal news.
9/26/17 update: Though a season three renewal hasn’t been announced, there have been reports of season three casting and filming.

What do you think? Are you glad that The Last Kingdom TV show has been renewed for a third season? How would you feel if this TV show had been cancelled instead?

I would really like to see season 3. Why are so many good shows cancelled? Please bring it back.

My husband and I very much enjoy the series. We hope it is not cancelled. Destiny is all.

I have just Binge watched Seasons 1 & 2 of The Last Kingdom and really enjoyed the series. I vote for renewal of Season 3.

I love this show!!! I am hooked and like it better than GOT!!!

Loved the first 2 seasons and hope for more!

I can’t wait for the next season.

I’ve read all 10 books of the Saxon Tales by Bernard Cornwall. I did so after watching the first season. Then I bought season 2. So I’m hoping they’ll do the whole series!

I am pleading with you not to cancel this show! Not only because it’s anazing but for the marketing reasons alone. It hasn’t gotten enough recognition as of yet, I’m telling all my Game of Thrones friends to watch it, it has the same Intrigue an adventure. I’m sure it’ll have huge audience if you would just make it, you have to make it it’s incredible!

I hope show is renewed for third season. I really enjoyed first 2 seasons. It makes a great follow up on English history after History Channels “Vikings”

this show is great, please bring it back for a third and fourth and forever season