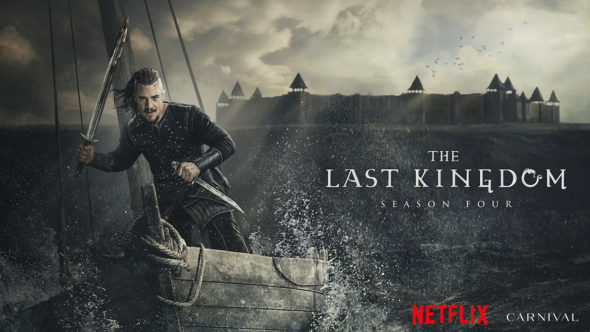 Will Uhtred finally claim his birthright? Has the The Last Kingdom TV show been cancelled or renewed for a fifth season on Netflix? The television vulture is watching all the latest cancellation and renewal news, so this page is the place to track the status of The Last Kingdom, season five. Bookmark it, or subscribe for the latest updates. Remember, the television vulture is watching your shows. Are you?

Unless they decide to publicize viewership, it is difficult to predict whether Netflix will cancel or renew The Last Kingdom for season five. Since Netflix isn’t ad-supported, it can take a chance on series it believes in, but sooner or later it comes down to production costs, versus viewership numbers. Generally speaking, Netflix TV shows which are going to be renewed are usually picked up within a month or so of the series or season premiere. My sense is that this one is popular enough to be renewed but, I’ll keep my ears open and an eye out for news, and will update this page with breaking developments. Subscribe for free alerts on The Last Kingdom cancellation or renewal news.

7/9/20 update: The Last Kingdom has been renewed for a fifth season on Netflix.

What do you think? Are you glad that The Last Kingdom TV show has been renewed for a fifth season? How would you feel if Netflix had cancelled this TV series, instead?

Better than Vikings or GOT. It has not let up, each season as good as the last and the actors, barr none, have been fantastic. Dreymon is an absolute star – seems amazing the he is not being deluged with scripts right now, but have not seen him anything but TLK. Destiny is all!

Yes bring it back. Best tv show for years

I read all of Bernard Cornwell’s books as he is a very accurate historian as well as a great novelist and This series has met all my hopes as a 10 star series on netflix > PLEASE renew for whenever Covid 19 allows production to restart!!!

Uhtred and the actor whom played him and the rest of his fellow men the Irish man A OMG sitred! Is it? haha. Finning am “****ting my self” please more. Please let me be in your show……………. SEASON 5, beyond

Awesome job on this period epic, The set, actors, details are right on. Not to mention you learn an accurate historical timeline in Saxon history. Best series on Netflix

The Last Kingdom, is done so well!
The Entire cast is tremendous!
It keeps you wanting more!!
I hope they renew the series!!
❤️❤️❤️❤️

This show is great and exciting, please don’t cancel. I just started watching this show this year, 2020 and I can’t wait for season 5

You have to renew this show…it is simply magnificent.

Please, please don’t cancel The Last Kingdom!! What an awesome show! I couldn’t stop watching! The actors are fantastic, the costumes and scenery are amazing! You feel like you are there with them and sharing their stories. Keep it going!!!

I love The Last Kingdom as does my whole family and all of our friends!

I really hope it does continue to Season 5. One of my major favourites, the others being The Blacklist and Vikings.
I binge watch if at all possible. Besides it needs to continue, we cannot finish until Uhtred regains Bebbanberg and disposes (in the most horrible way possible) of his uncle especially as his son killed Beocca.

The Last Kingdom is extremely entertaining…hard to not binge-watch! Unless it’s a financial anchor, it definitely should continue with season five, six, and if the writers can keep it fresh, season 7!

Please a 5th series . Such an enjoyable tv show. Please bring back….