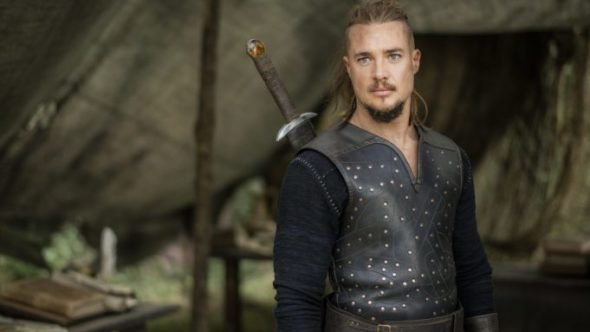 The cast and crew of The Last Kingdom TV show will keep making history. Netflix has renewed the TV series that’s based on Bernard Cornwell’s The Saxon Stories novels. The fifth season will be based on books nine and 10.

It’s so good to know we’re good to go. All aboard the party bus! #Season5 #TheLastKingdom pic.twitter.com/OLzOH5Fckx

What do you think? Do you enjoy The Last Kingdom TV series? Do you plan to watch season five on Netflix? How much longer should this drama series run?

Please, please don’t cancel. I love this series. I have watched it countless times. I husband even likes to watch it with me. It is our favorite series on Netflix please find a way to keep it going.

I love this series and am so glad I found it on Netflix. I’m watching it for the 4th time and this series should continue through to it’s natural conclusion via the book series. This series ranks up there almost equal to Outlander.

One of the best series ever!! It should continue thru to the end!! I have read the series twice and have rewatched the TV show at least three times!! Outshines all other series!! Even GOT by a long shot!!

Absolutely love this show! Best thing I’ve watched in a long time. I hope they continue to get renewed until they can finish adapting the entire book series!

Love this series. Have read all the books too.

Get this..I’ve watched all seasons 5 times!! We also started and Uthred group that meets every 2 weeks and watches 2 episodes each time. We’re now on hiatus with “Goliath” and counting the days Season 5. Keep it coming!

I loved this series, best show on tv

Great news for a great show!!

I loved this series! I am so delighted there is more to come, I’ll be there ,watching every minute.

Love, love, love! So happy there will be another season!!!! Can’t wait!

Excellent news! Watching series on a loop. Knocks the Vikings and GOT out of the water

I love this show. I have read the books and only wish the seasons were longer and more in depth. I understand that could be costly, but so much is left out and want this series to continue.

Have watched “Last Kingdom” since the beginning and love it. Wish it would go on for many more years! This past season was especially awesome, bringing Utreds companions into the show more was really exciting and fresh, getting to know the trio better, we hope they continue to be as much as and more involved. They are great actors also!

I really enjoy this series and look forward to season 5 and beyond if possible. The writers are great with their scripts and the actors playing the main characters are casted brilliantly. I can’t wait till the show comes back on again.