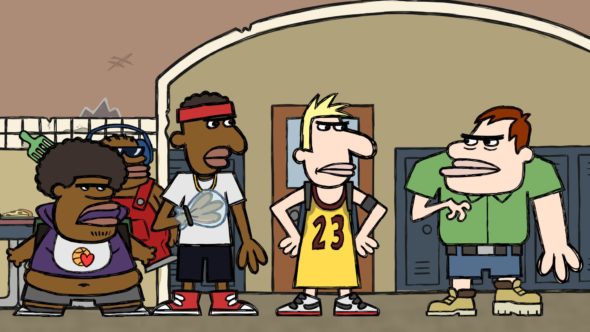 Will Jamal, Grover, and Milk become the stuff of legends? Has the Legends of Chamberlain Heights TV show been cancelled or renewed for a third season on Comedy Central? The television vulture is watching for the latest cancellation and renewal news, so this page is the place to track the status of Legends of Chamberlain Heights season three. Bookmark it, or subscribe for the latest updates. Remember, the television vulture is watching your shows. Are you?

The network has had great success with South Park for two decades, and Dr. Katz, Professional Therapist and Futurama had respectable runs. Other than those series though, most of the cabler’s animated sitcoms have been a one, two, or three season endeavor. Witness Moonbeam City and Ugly Americans, as well as Lil’ Bush.

It’s difficult to tell from the ratings however, I think Legends of Chamberlain Heights will be renewed for a third season. Comedy Central picked up season two, before the series even premiered, which is a sign that they have faith in it. Also, the second season was ready to premiere just nine months after season one kicked off. Although that may not seem super impressive, some animated series get bogged down with production issues (I’m looking at you, Rick and Morty), which doesn’t seem to be the case here. What’s more, co-creator Brad Ableson worked on The Simpsons, between 1996 and 2015, so he has certainly “made his bones,” as it were. Speaking of bones, for now, I’ll seek my supper somewhere else. Subscribe for free updates on any cancellation or renewal news.

What do you think? Should Comedy Central cancel or renew the Legends of Chamberlain Heights TV series for a third season?

Please dont cancel the show, give it a chance, ive watched season 1 and 2 multiple times and dont even get tired of it. pls renew season 3 plz plz pls

I heard this show got cancelled.
YAY! THIS IS THE BEST DAY OF MY LIFE!
BURN IN HELL CHAMBERLAIN HEIGHTS, NO ONE WILL MISS YOU!

What’s up in the world that was the best damn cartoon that ever ever ever aired on tv. In my life time I’m 53 yrs old please continue please I love the legend of chamberlain heights why cancel why that **** up trump

Pleeeease don’t cancel, this show made the summer time that much better! I love these dudes, and crack my is soo wacky! Haha

Need A third season for sure

Renew Legends of Chamberlain for Season 3!!! The best comedy on TV!