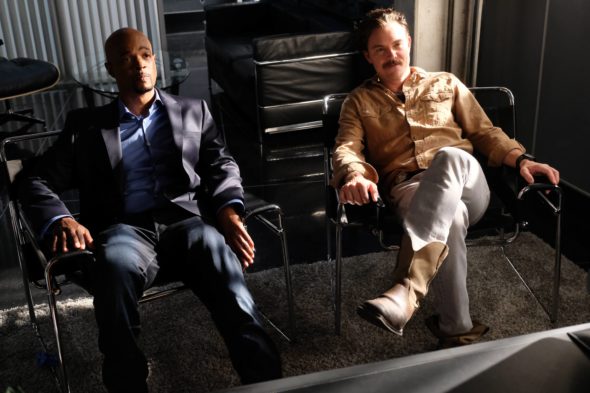 Are there enough cops out there not playing by the rules? Has the Lethal Weapon TV show been cancelled or renewed for a second season on FOX? The television vulture is watching for the latest cancellation and renewal news, so this page is the place to track the status of Lethal Weapon season two. Bookmark it or subscribe for the latest updates. Remember, the television vulture is watching your shows. Are you?

Airing on the FOX television network, Lethal Weapon follows two very different cops who are forced to work together on the streets of Los Angeles. Grief-stricken after the loss of his young wife and unborn child, ex-Navy SEAL-turned-detective Martin Riggs (Clayne Crawford) moves to California to “start over.” He’s paired up with family man Roger Murtaugh (Damon Wayans) who’s just coming back to the job after a near-fatal heart attack. Can these two live long enough to learn to work together? The rest of the cast includes Kevin Rahm, Keesha Sharp, Dante Brown, Chandler Kinney, Jordana Brewster, and Johnathan Fernandez.

The first season of Lethal Weapon averaged a 1.57 rating in the 18-49 viewer demographic and 6.54 million viewers. Learn how Lethal Weapon stacks up against the other FOX TV shows.

Overall, the first season of Lethal Weapon has been a solid performer for FOX. Although the original season one order was for 13 episodes, back in October, the network ordered five additional installments and called it a “full” season. Lethal Weapon was renewed for season two in February of 2017. At the time of its renewal, the show was one of the top five scripted FOX TV series.

What do you think? Did you expect FOX to renew Lethal Weapon for season two? How would you feel if they had cancelled this TV show, instead?

Please do not cancel Lethal Weapon. Best show on TV.

Please do not cancel.Advertise it more.hype your shows
You have the best show in years.This rivals friends, Hawaii5o,Best series in several years. It can go the distance.Besides whatever.somtimes demographics dont tell the whole story.Some people don’t know good tv.Its a hit.Action,humor better than Mel Gibson ever thought about…love these guys.

Happy to see it is renewed. Looking forward to seeing it

Love this show. The best we have seen in a long time. Can’t wait for season two to begin!!!!

Great show and with so much crap on tv now days its refreshing to look forward to one night a week!!! Keep airing stuff like this fox and you’ll get great ratings!!!

Please! please! please! DONOT cancel leathel weapon. Best thing I have seen in 30years. Well do to all the team for this And especially whoever choose the two actors they work excellent together.

We look forward to watching Lethal Weapon TV series each week and record it when we are away. One of our top favorites along with Big Bang Theory, Scorpio and The Librarians. Thank you for keeping Lethal Weapon on.

I live in Iceland and have se lots of Tv shows and this one is good. please don’t stop doing this season because this is one off few reduced season it’s absolutely holding old good humor and action. and I know this don’t need the original actors because this actors is doing were well and it’s hard to finding something it’s so good and don’t need to have original actors because this actors is holding this season in right line with old humor og old and new and old action and that is not easy to find now on so… Read more »

Great show would have cried profusely if not renewed.

Great show with action, humor & drama. We loved the show. Want it back.

Great programme put it back on

My wife and I loved the show very entertaining no dull moments, we be very sad and broken hearted if they cancel this show, there are to many shows being canceled.