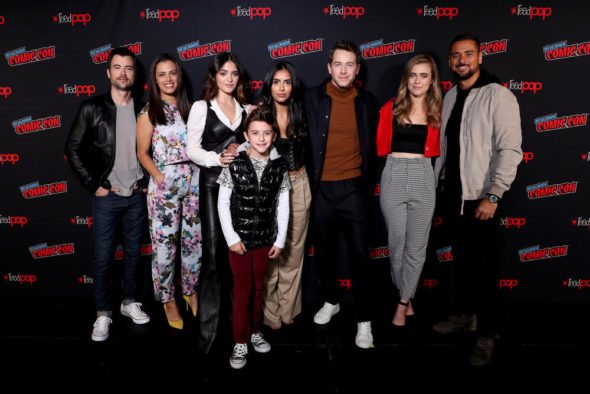 Manifest is ready for its second season. NBC released a sneak peek for season two of the series at New York Comic Con over the weekend. The drama will return this spring.

Manifest tells the story of the passengers of Montego Air Flight 828. They took off from their vacation spot, but their plane did not land until five years later. During that time, the passengers were presumed dead, and their loved ones moved on with their lives. The mystery of where they were during that time fuels the series. The cast includes Melissa Roxburgh, Josh Dallas, Athena Karkanis, J.R. Ramirez, Luna Blaise, Jack Messina, and Parveen Kaur.

Season one of the NBC series averaged a 1.25 rating in the 18-49 demographic and 6.48 million viewers. It was a big hit with fans. Season one wrapped back in February, and a season two renewal was announced in April.

A premiere date for Manifest season two was not revealed. Check out the sneak peek below.

What do you think? Are you a fan of Manifest? Are you excited for season two?

This is a good series. Please continue this program

I am so happy to see this show return. One of the very best programs. Please PLEASE DO NOT CANCEL this show.

why isn’t manifest not on tonight at 10pm?

I am so hooked……the writers really know how to bring in new happenings and I can’t wait to watch the next show.

YES, please bring back Manifest!! It’s one of the coolest shows I’ve seen in a long time.

I hope this is not a joke. It would be nice to know what happened. Hate it when something good on tv leaves you hanging. Can’t wait…

Why such a long wait for the showing?

When???? When will we FINALLY get to see Season 2 of Manifest?? I can record 84 shows and it is #2 right under New Amsterdam… the all the Chicago’s (Med, Fire, & PD… I’m an addict ) but I feel like I’ve been left hanging for a year… do we have a tentative date?? My DVR says no upcoming airings so I’m beginning to loose hope….. it’s RARE for me to find something that keeps my interest on TV- I only use to turn it on cartoons for my now adult son & almost adult daughter but then I was… Read more »

Great show. Glad it was renewed.

I love this show, keeps me on the edge of my seat! Can’t wait for season 2!

Love this show!!! Can’t wait for its return.

Can’t wait for it to come back on