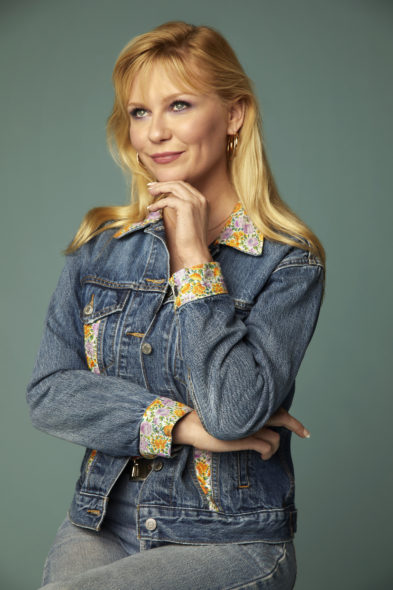 Krystal Stubbs is coming back for more. Showtime has renewed the On Becoming a God in Central Florida TV show for a second season.

Airing on Sunday nights, On Becoming a God in Central Florida stars Kirsten Dunst with Théodore Pellerin, Beth Ditto, Mel Rodriguez, Ted Levine, Usman Ally, Julie Benz, Melissa De Sousa, John Earl Jelks, Sharon Lawrence, Josh Fadem, Da’Vine Joy Randolph, Alexander Skarsgård, and Mary Steenburgen. Taking place in a small Florida town near Orlando in the early 1990s, the show follows Krystal Stubbs (Dunst), a minimum wage employee at a waterpark. She’s looking for a better life and is willing to lie, cheat and con to get it. She works her way up the ranks of Founders American Merchandise (FAM), a cultish pyramid scheme that ruined her family in the first place. As Krystal dives deeper into FAM, things take on a very serious turn as the business and her actions begin to affect everyone that is close to her.

The first season of On Becoming a God in Central Florida is averaging a 0.03 rating in the 18-49 demographic and 194,000 viewers. Six episodes have aired thus far and the show is one of Showtime’s lowest-rated scripted series.

The renewal announcement was made today by Gary Levine and Jana Winograde, Presidents of Entertainment, Showtime Networks Inc.

“With such imaginative storytelling and an absolutely inspired lead performance, On Becoming a God in Central Florida has been a revelation,” said Winograde. “Kirsten, Esta, Robert, Matt and Charlie have crafted a wondrous blend of satirical light within the economic and emotional melancholy that confronts so many Americans. We couldn’t be happier that On Becoming a God is on SHOWTIME, nor more eager to see what wild events await our ensemble in the downline of season two.”

What do you think? Have you been watching the first season of On Becoming a God in Central Florida on Showtime? Did you think that it would be cancelled? Are you glad that it’s been renewed for a second season?

Absolutely love this series! Fabulous acting.
So happy to hear it is being renewed.