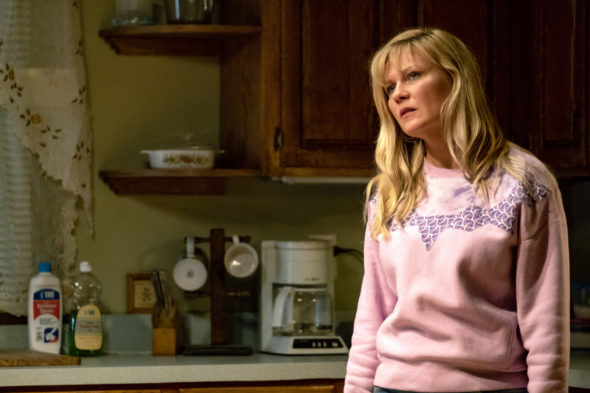 Another TV show renewal has been reversed due to the ongoing pandemic. Showtime has announced that plans for a second season of the On Becoming a God in Central Florida series have been cancelled.

On Becoming a God in Central Florida stars Kirsten Dunst with Théodore Pellerin, Beth Ditto, Mel Rodriguez, Ted Levine, Usman Ally, Julie Benz, Melissa De Sousa, John Earl Jelks, Sharon Lawrence, Josh Fadem, Da’Vine Joy Randolph, Alexander Skarsgård, and Mary Steenburgen. Taking place in a small Florida town near Orlando in the early 1990s, the show follows Krystal Stubbs (Dunst), a minimum wage employee at a waterpark. She’s looking for a better life and is willing to lie, cheat and con to get it. She works her way up the ranks of Founders American Merchandise (FAM), a cultish pyramid scheme that ruined her family in the first place. As Krystal dives deeper into FAM, things take on a very serious turn as the business and her actions begin to affect everyone that is close to her.

The first season of On Becoming a God in Central Florida averaged a 0.02 rating in the 18-49 demographic and 185,000 viewers. Despite less-than-impressive numbers, the series was renewed for a second season in September 2019.

“Last year, Showtime renewed On Becoming a God in Central Florida but unfortunately, due to the pandemic, we were unable to move forward with production on the new season,” Showtime said in a statement to THR. “The pandemic has continued to challenge schedules across the board, and although we have made every effort to reunite the cast and crew for a second season, that has become untenable. It is with great regret that we are acknowledging On Becoming a God will not return. We extend our deepest thanks to star and executive producer Kirsten Dunst, creators Robert Funke and Matt Lusky, showrunner Esta Spalding and their fellow executive producers George Clooney, Grant Heslov, and Charlie McDowell, the terrific cast and crew, and our partners at Sony Pictures Television.”

The show was produced by Sony TV, an outside studio, so Showtime would have had to pay a licensing fee. The series would have been increasingly expensive to try to film safely during the age of COVID-19. According to sources, the cast has already been paid for season two.

On Becoming a God joins a growing number of series that have been cancelled thanks to the global pandemic. Other cancelled shows include Evel (USA), GLOW (Netflix), I’m Sorry (truTV), I Am Not Okay With This (Netflix), The Society (Netflix), and Stumptown (ABC).

What do you think? Did you enjoy the On Becoming a God in Central Florida TV series? Were you looking forward to watching season two on Showtime?

I’m disappointed! I enjoyed the first season. Maybe someone else will pick it up?

On the family side will Gabby Duran have the lights dimmed? It has been a year since she made her entranceway.

I was looking forward to the new season . They are making a mistake.