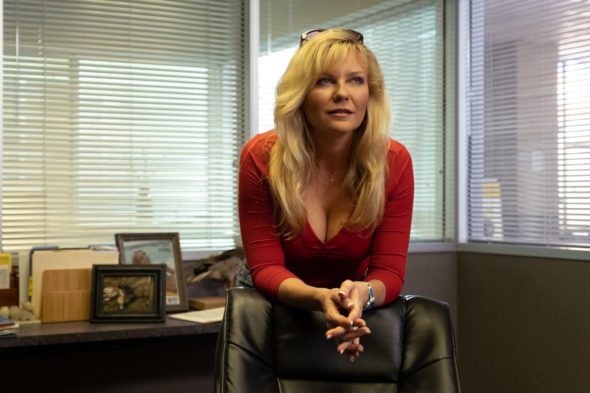 TV show description:
From creators Robert Funke and Matt Lutsky, the On Becoming a God in Central Florida TV show is a dark comedy set in the world of multi-level marketing or MLM. The series explores the cultish aspects of MLM and how people get caught up in their pursuit of more.

Unfolding near Orlando, Florida in 1992, On Becoming a God in Central Florida centers on a minimum-wage water park worker, Krystal Stubbs (Dunst). Krystal’s involvement with Founders American Merchandise (FAM) was once her ruination, but now she is pulling out all the stops to rise to the top of the pyramid scheme that is FAM.

The only thing FAM likes better than wrapping itself in the flag is rolling around in the billions of dollars it’s bilking from people. As Krystal lies and connives her way up the FAM ladder, she becomes entangled with its most loyal devotee, Cody (Pellerin).

As Krystal becomes more enmeshed in the MLM business, there is the fallout for her near and dear. They include her kindly boss at the water park, Ernie (Rodriguez), as well as his wife Bets (Ditto), who is has her doubts about FAM. Running after the American Dream can be a complete nightmare.


What do you think? Do you like the On Becoming a God in Central Florida TV series? Are you sorry that this Showtime TV show has been cancelled instead of renewed for a second season?

Fun show!, not profound or anything, but funny and interesting and Kirsten Dunst is always very watchable! For a special thrill, look up the credits of the guy who lays Obie Garbo III !

Please DO RENEW this show for many more seasons