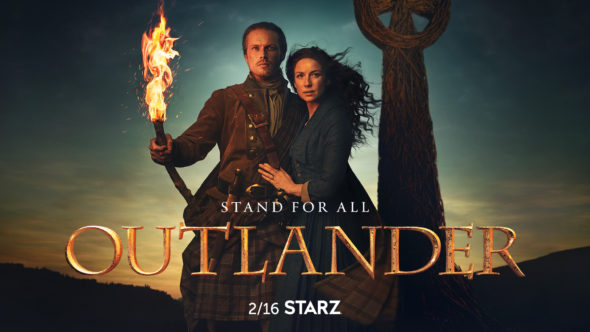 There’s no need to worry about Outlander being cancelled this time around. Starz renewed the series for seasons five and six, well in advance. Will season six be the end? Will Outlander be cancelled or renewed for season seven and beyond? Stay tuned. Status Update Below.

A historical time travel drama, Outlander stars Caitriona Balfe and Sam Heughan, with Duncan Lacroix, Sophie Skelton, Richard Rankin, David Berry, Ed Speleers, Maria Doyle Kennedy, Cesar Domboy, Lauren Lyle, Colin McFarlane, Kyle Rees, Tim Downie, Caitlin O’Ryan, Billy Boyd, Jon Tarcy, Michael Xavier, Paul Gorman, Alistair Findlay, Bronwyn James, Chris Larkin, Ned Dennehy, Anna Burnett, and Chris Donald. The story follows time-traveling 20th Century doctor Claire Fraser (Balfe) and her 18th Century Scots Highlander husband, Jamie Fraser (Heughan). In season five, the Frasers are fighting for their family and the home they have forged on Fraser’s Ridge. Jamie must find a way to defend all that he has created in America and to protect those who look to him for leadership and protection. With her family together, at last, Claire must use her modern medical knowledge and foresight to prevent them from being ripped apart once again.

For comparisons: Season four of Outlander on Starz averaged a 0.17 rating in the 18-49 demographic and 1.04 million viewers.

What do you think? Do you like the Outlander TV series on Starz? Should it be cancelled or renewed for a sixth season?

It’s been downhill since S2. The rotating crew of writers have sacrificed the heart of the story for “drama” and film school fluff. There has been a noticeable loss of chemistry between the leads since the middle of S3 and it seems like they are just going through the motions most of the time. I had really high Hope’s, especially after the magical first Season. Time to pull the plug

I love Outlander. Keep it on thru all of the books. Glad it was renewed for Season6. Nielsen must not be capturing those of us who watch it early and not on Dunday night

Outlander gives us outstanding entertainment and something to look forward to every day on Cable. It is so good and we care about this family. We have watched each episode more than once and do not want it to end. Please continue this saga!!

Renew it please!!! Such a great serie, I love it.

Season 6 will happen. They have already started shooting.

No they have not started shooting Season 6!

It’s such a great show, it should continue on. Every show has some kind of a long during it. This will pass and the love story continues We all need fantasy in our lives right now. Keep it going. The books are fabulous.

It’s such a fabulous series, every series has a bi

Yes, please renew it. It’s such a fabulous series, every series has a bit of a long in it. The story will MoveOn and the show will be fabulous.

PLEASE don’t cancel Outlander. It’s the only thing lifting me up between Covid and the waste of the White House. I BEG you

I hope that Outlander continues to the end of the books. It would be cruel not to. The pleasure and hope it has given to so many people is amazing. Many would be devastated if it finished early. We would love it to continue

Love the show hoping tbey go to book 10 as well as spin offs. So so much more to see. Great adaptation of the books

If Outlander gets cancelled, the level of depression that I will slip into will be indescribable. The show is only getting better! I can’t wait for it to get renewed for more seasons.

Outlander is my favorite show. Has been since the beginning. Season 5 has been excellent and I’ll bet will do great in reruns. Unfortunately it’s siting during the pandemic and people are otherwise occupied or recording it as they are binge watching other shows. I prefer to watch series the same way for immediate continuity. Watch what happens to Outlander when they post most binge watched shows. It will be in the top 5!