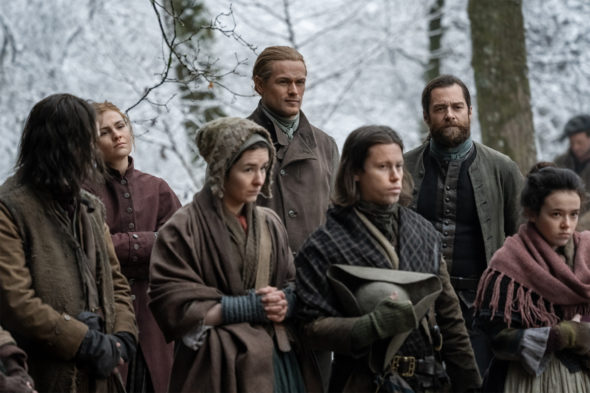 Will Claire and Jamie be able to successfully defend their new home in the sixth season of the Outlander TV show on Starz? As we all know, the Nielsen ratings typically play a big role in determining whether a TV show like Outlander is cancelled or renewed for season seven. Unfortunately, most of us do not live in Nielsen households. Because many viewers feel frustrated when their viewing habits and opinions aren’t considered, we invite you to rate all of the sixth season episodes of Outlander here.

What do you think? Which season six episodes of the Outlander TV series do you rate as wonderful, terrible, or somewhere between? Are you glad that Outlander has been renewed for a seventh season on Starz? Don’t forget to vote, and share your thoughts, below.

Totally loved this season , the finally was brilliant

Look forward to seeing it every Sunday. Love it and enjoy it never missed it.

Outlander is one of the best series I’ve ever seen. Season 6 was too much crammed into too few episodes. During Claire’s illness, little was seen of Jamie’s heartbreak through it. It seems rushed and was very close to the books. I’m hoping that it gets renewed again for a season 8 as I know season 7 is in filming. Claire is a very strong lead lady and I’m disappointed in the ether storyline, as that story was not in the book. I absolutely love this series and I am thankful that Diana Gabaldon wrote this for all of us.… Read more »

I cannot imagine life without Outlander and am looking forward to at least 10 seasons! However, Season 6 seemed to have too much crammed into too little time. There was much to take in but no time to assimilate without jumping to another completely difference scene. This was NOT the normal Outlander show – continuity was missing. Also the character changes were too dramatic – Claire, Jamie, Fergus, and I don’t see what the new family is going to add other than fighting and frustration. Even though interviews with Sam and others warned of a “dark” season, this was just… Read more »

Brilliant series and wouldn’t change a thing. Watch it avidly

After a two-year wait, I was underwhelmed. At the end of the episode I felt “so that’s it?” I’m a devoted fan so of course I’m sticking with it, but there were too many overlapping story lines. Felt like the episode was jumping from place to place. Things will improve!

I am happy that they got over real fast how it ended last season. I Love Outlander and I know this Season will be Great. They were smart to get to what the New Story Line will be this Season, I will watch it every Sunday. The Actors are Really doing a Wonderful Job. I am already Hooked for Season 6. Great Job, Wonderful Series.

I was crying for a half hour after season 6 staritng episode.