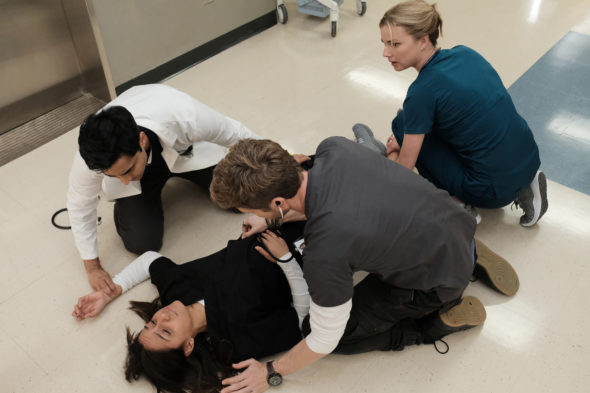 I think this is an excellent show!

Please please don’t cancel this show!!!! Renew it now!!! Please and thank you!!

I really enjoy the show! Please don’t cancel! IT deserves a second season!!!

My husband and I love this show we have some demanding jobs and we can’t watch it when it is love but we catch it on Hulu the night after always. Please keep it going for another season.

I have come to really like this show. Great casting, good acting, credible plots. I hope it is renewed.

Soooooooo happy it’s back! That was a long two weeks! This is truly the best show ever! Bring on season 2 already! Team Conrad!

This show is unique and intriguing. HOpefully it will be renewed. It quickly became my favorite medical show.

The Resident is an awesome show! My husband and I both love it. I’ve told other people about it, and they love it too. As others have said, it’s different from other medical shows. The cast is great. Hoping it does not get cancelled!!

Couldn’t agree with Melaina (below) more. Every word of what she said is hereby seconded! PLUS, I think that Matt Czuchry is one of the most compelling, sympathetic, easy-to-love actors of our time (and underratedly so!) He is a phenomenally emotive, empathetic, convincing and emotive actors I’ve ever witnessed. Simply optimum. Moreover and oddly enough, virtually the same accolades could and should be delivered in regard to Emily VanCamp. SO…to have these two highly talented, superior forces of the performing arts involved in the same project is a true gift as with respect to which I hope the producers and… Read more »

Agreed. I love all these characters, even the evil ones. It just really picked up and the plot twists are phenomenal. My absolute favorite is Nina.

I love this show, too. Just because someone has an MD or an RN after their name doesn’t mean they are saints. It takes all kinds to run a world, now doesn’t it. This show is gritty and real. It seems the first season is over, hopefully it will return.

I absolutely LOVE this show, I am going into medicine and I have become addicted, I love al the characters and their roles, they are all amazing.

My wife and I really enjoy the resident. We watch every Monday night. Love The story line. One of the better medical shows we have seen.

This is actually a medical drama that I like. Please renew!!!!