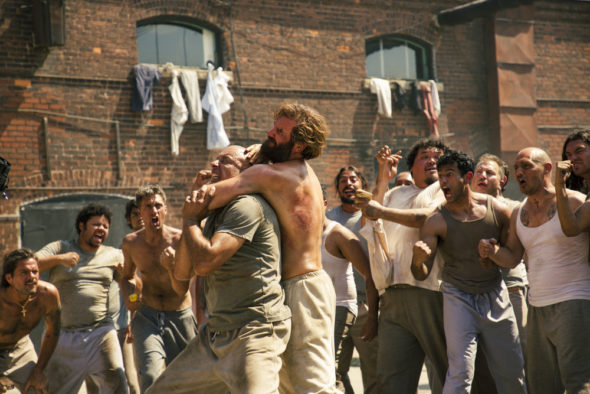 Have Bryan Mills and his team saved the day, yet again? Is the Taken TV show cancelled or renewed for a third season on NBC? The television vulture is watching all the latest cancellation and renewal news, so this page is the place to track the status of Taken, season three. Bookmark it, or subscribe for the latest updates. Remember, the television vulture is watching your shows. Are you?

Airing on the NBC television network, Taken stars Clive Standen as a young, but still lethal Bryan Mills. The cast also includes Jennifer Beals, Adam Goldberg, and Jessica Camacho. This prequel series to the Liam Neeson feature film trilogy centers on Mills, as he and his team undertake rescue missions around the globe.

The second season of Taken is averaging a 0.38 rating in the 18-49 demographic and 2.52 million viewers. Compared to season one, that’s down by 62% and 51%, respectively. Find out how Taken stacks up against other NBC TV shows.

Will NBC cancel or renew Taken for season three? Based on the US broadcasts, it was likely to be cancelled after one season. However, the show’s success overseas played into its continuation, so we’ll have to wait and see if that holds true, again — with much lower US ratings this time around. For now though, I’ll keep an eye on the Nielsens and update this page with breaking developments. Subscribe for free alerts on any Taken cancellation or renewal news.

What do you think? Are you sorry to hear that Taken won’t be renewed for a third season? Do you think that NBC should have cancelled this TV show?

Really like the show. Realistic, can’t pick it to bits as easily as other similar shows.

I’m currently watching ‘Taken’ on Roku in April of 2021. I wanted to know what happened, why it was cancelled etc.. I’m on season two episode six and thoroughly enjoy it. Too bad it was cancelled. I think it was excellent. Great characters i.e. people you like, care about and the chemistry comes through. Topics are real, interesting and current (at the time it was filmed) and nicely woven into the storyline. There’s non-stop action and while it’s hard to believe Mills has been in about a hundred fights, I root for him in every one. Fights scenes are well… Read more »

Seems every time there is a good series the networks just stop it. It would be nice if they got the audience opinions first. One reason I don’t watch much of the network anymore. Stupid shows are always what is on or its the same show all day long ugh. Not worth my attention..

Yes I watched all three films enjoyed just watched season 1 and 2 of the series it would be fantastic if they continue with the series so I wait with baited breath for season 3. So please continue to make a lot more series thankyou
From the U.K.

I love the series Taken. Full of action without all the filthy language.

Why take off a brilliant series. What’s the matter with these companies. Why start a series if you’re not going to finish. Please bring back taken with Clive Standing and the team

Why cancel an awesome TV Series!!!!

My husband and I have been waiting and waiting for 3rd season of Taken to return to TV. I finally googled to find out when it will return and surprise, surprise it has been canned!!!! Why, why pull the plug on such an awesome TV Series???? I really shouldn’t be surprised, for some reason when good shows are produced, who ever funds the shows don’t get they have a awesome TV Series and they pull the plug to soon!!!!

So agree, the only reason at the moment that I have prime is taken. Not happy Jan

Big mistake cancelling this show!! Everyone I have spoken to said one of the best!!! What is wrong with you people.. The polls all say we want a season three!!! N

It would be great if they return Taken. It’s plots are very unpredictable and very current with the times!

NBC be cancelling real awsome shows and be keeping on12seasons of foolishness , just sell it to Netflix !!!bring back TAKEN

Come on guys. IT is NEVER correct to just end a show without a wrap up. Even a wrap up that is a few “specials” long would be worth while.
Create a circumstance where everything changes, and everyone is in “trouble” then just close the door? considering the movie Taken that makes no sense. I would think that the holder of the franchise would not let this happen!