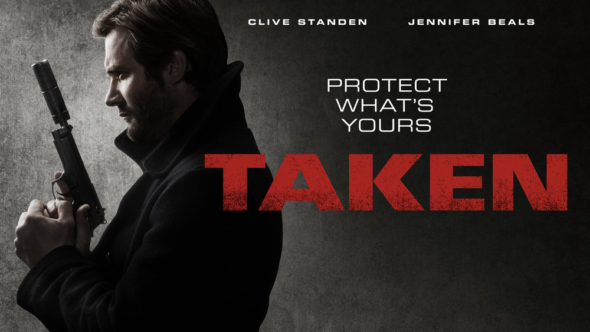 Is Bryan Mills still on the case? Has the Taken TV show been cancelled or renewed for a second season on NBC? The television vulture is watching for the latest cancellation and renewal news, so this page is the place to track the status of Taken season two. Bookmark it, or subscribe for the latest updates. Remember, the television vulture is watching your shows. Are you?

The first season of Taken  averaged a 1.00 rating in the 18-49 demographic and 5.13 million viewers. Find out how Taken stacks up against other NBC TV shows.

The series premiered with mediocre numbers and the ratings have gotten much worse — despite having The Voice as a lead-in. I suspect that the Taken TV show will be cancelled and not renewed for a second season.
5/9 update: Thanks to international sales, NBC has renewed Taken for a second season. Details here.

What do you think? Are you glad that the Taken TV show has been renewed for a second season? How would you feel if NBC had cancelled this drama series, instead?

Enjoy the show very much. Hoping it is renewed for next season.

Please please do a second season. This is one of the best shows on TV since they took Person of Interest off. Bryan’s character is just hitting his pace with the Team and the Team has come together.

Love the show I look forward to Monday nights just to watch Taken. The season was way to short. Please please renew the show.

Please renew Taken!! My husband and I look forward to it every week!!! Started watching it and was hooked!!

Please renew Taken. Love the show – Great cast and writing which I know will get even better given a chance to continue.

Please renew this shoe.Great action and plot.Renew it soon My family loves it.

Wait for this show every Monday night! The season has been too short! Please renew this wonderful show!

please renew, the best action show that is clean, and begs to be watched. There are many in South Africa that love this show. Taken is Brilliant and deserves the renewal for season two. DO NOT NOT NOT NOT CANCEL PLEASE

My husband & I love this show. Please renew it!

I love this show – of course that means that NBC will cancel it – but PLEASE don’t!!

I love this show. I hope it renews for another season.

This is truly an excellent show with an excellent cast!! I did NOT believe that I would like this show, but I decided to give it a fair shot. I was pleasantly surprised to find it was a well-written show that was interesting, kept my attention, and I looked looked forward to next week’s episode. I am really hooked, and I sincerely hope Taken is renewed.