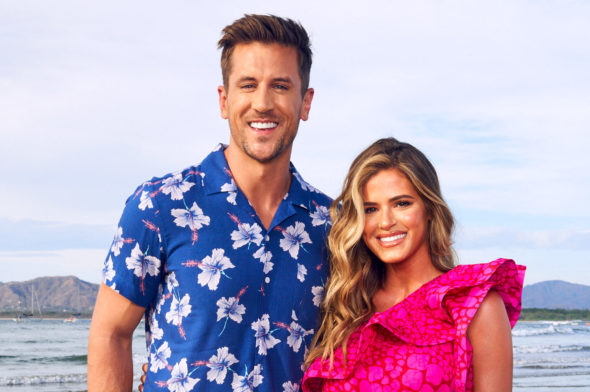 The Big D is headed to TBS. A new dating series, it will be hosted by faces familiar to  Bachelor nation. JoJo Fletcher and Jordan Rodgers from The Bachelorette will host the 10-episode dating competition series which comes from the people who created the Dating Naked and Are You The One? TV series. Fletcher and Rodgers met on the ABC series in 2016 and later married.

TBS revealed more about The Big D in a press release.

“TBS announced today the greenlight of The Big D, a 10-hour dating competition series hosted by JoJo Fletcher and Jordan Rodgers (The Bachelorette), and from the creators of Dating Naked and Are You the One?. The social experiment takes on the relationship space with a twist, following recent divorcees as they search for romance in paradise with one catch – their exes will be along for the journey.

“Watching other people’s relationships and rooting for old romances and new couples is addictive,” said Brett Weitz, General Manager for TNT, TBS and truTV. ‘The Big D’ is another attention grabbing, bold creation in our growing unscripted portfolio.”

Over the course of several weeks, 10 divorced couples move into a tropical villa in Costa Rica together to re-learn how to date while looking for love with the other contestants in the house. The group takes part in revealing relationship EX-ercises designed to help the singles form connections, make peace with their former partners, and finally get over the issues holding them back from dating. Each episode, one person who isn’t relationship material will be eliminated. Jealous exes may try to send their rival home or perhaps even defend their exes’ honor – the possibilities are endless. Hosts Fletcher and Rodgers are no strangers to courting in-front-of a camera and will be on-hand to help the divorcees get back into the dating game.

“Dating is terrifying. Dating alongside your ex while living in the same house could be paralyzing or could help reignite an old flame,” said Corie Henson, EVP, Head of Unscripted for TNT, TBS and truTV. “The Big D has all of the elements of a great relationship series with a bit of a twist. I can’t wait to see what happens.”

“After a year full of challenges, the opportunity to join forces with TBS and help people find love was a no-brainer,” said Fletcher and Rodgers. “We’re excited to go on this adventure in paradise with romantic hopefuls as they step out of their comfort zones and face unconventional dating scenarios in hopes of finding new love.”

A premiere date for The Big D has not been set.

What do you think? Do you plan to check out The Big D when it arrives on TBS?

Yes, I will watch it. At least the first episode.

I can’t wait to see the show… oh the drama