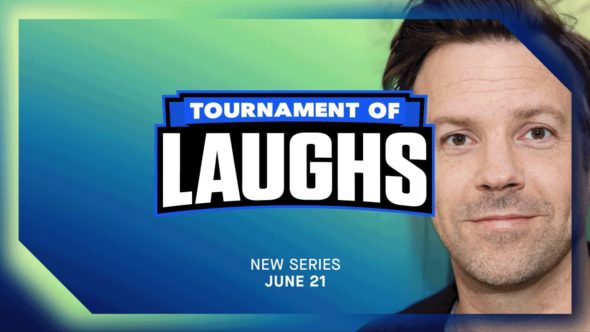 Tournament of Laughs is coming to TBSand Jason Sudeikis is going to host the new competition series for comedians. The series is set to premiere later this month.

TBS revealed more about this new series in a press release and released a teaser video.

“TBS is serving up the ultimate comedic match with a seven-episode greenlight for Tournament of Laughs, set to premiere on Sunday, June 21 at 10:00pm ET/PT. Hosted by Jason Sudeikis (We’re The Millers, Saturday Night Live), the series will present 32 comedians facing off in a hilarious, single-elimination bracket-style tournament, with each episode featuring multiple match-ups. The comics will go head-to-head virtually to out-funny one another with Sudeikis acting as the master of ceremonies and providing color commentary.

“We may be without some of our favorite sports right now but we can still partake in some fierce rivalries” said Brett Weitz, General Manager of TNT, TBS, and truTV. “These comics promise to bring the funny each week, but the audience will get to decide who gets the last laugh.”

In addition, a charitable donation will be made to the United Nations Foundation’s COVID-19 Solidarity Response Fund and Black Lives Matter.

Tournament of Laughs is produced by The Jay & Tony Show with Jay Blumenfield, Tony Marsh and Pip Wells serving as executive producers. Wells will also serve as showrunner.”

What do you think? Will you watch Tournament of Laughs when it premieres on TBS?