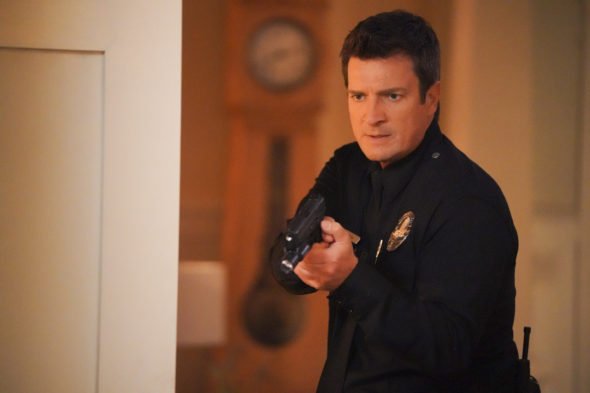 Castle ran for many years on ABC, and maybe, just maybe, Nathan Fillion’s latest series will be as lucky. Today was a good first step. The network has renewed The Rookie for a second season.

A comedy-drama, The Rookie stars Nathan Fillion, Alyssa Diaz, Richard T. Jones, Titus Makin, Mercedes Mason, Melissa O’Neil, Afton Williamson, and Eric Winter. The story centers on John Nolan (Fillion), a small-town guy who, after a life-changing experience, decides to pursue his dream of being an LAPD officer. Now he’s the oldest rookie on the force, and the brass thinks he’s just having a midlife crisis. He’s got to keep up with his younger co-workers (not to mention young criminals) or he’ll risk lives. Maybe though, he can use the experience he’s gained with age, and the determination he has developed over the years, to make a real go of it. Either way, he’s got a secret weapon — his sense of humor.

Airing on Tuesday nights, the first season of The Rookie averaged a 0.73 rating in the 18-49 demographic and 4.17 million viewers.

Out of the 21 scripted ABC TV shows of the 2018-19 season, The Rookie is in 14th place in the demo and ninth place in total viewership.

What do you think? Do you enjoy the The Rookie TV show? Will you watch season two of this ABC series?

Yes I love the show I hope it comes back

Yes I love the show I hope it comes back

Yay!!! So happy to hear that the Rookie is going to have a season 2! I love Nathan Fillian and all the rest of the cast, I am hoping for many more years to come for this show.

Happy to hear it has survived for Season 2. Just binge watched Season 1 and loved it!

Great show. Reveals the inner stresses of meeting standards to please the politicos while staying safe with a partner often in harm’s way. Really like the characters and authentic scenarios. I was a certified LEO reserve back in the mid ’70s. No helmets, a six-shooter revolver, no vests, no shotgun, and the radio stayed in the car. Graveyard shifts in a satellite city with an exploding population growth where carrying a legal firearm was often the custom made every shift a probable adventure.

Love Nathan Fillian’s new character on The Rookie! Loved the character of ‘Richard Castle’ on CASTLE, and now Nathan is creating a quite different character with just as much acting expertise and insight into the emotions of that character!

I love The Rookie. I don’t miss!!Officer Bishop is my favorite

I love this show so much! Great cast, great story lines. Keep it going!

This show is absolutely incredible. Friendships. Partnerships. Relationships. It is all incredible. Bringing tears of joy and tears of sadness. When watching The Rookie my emotions are on constant alert and ny adrenaline pumps as if I were in the shoes of these fantastic characters. My excitement of finding out this show has been renewed for season 2 has filled me with immense excitement!

As a Castle fan, I love love love the rookie! So glad it has been renewed for season two! Now do the right thing ABC and re-new whiskey cavalier also!

This is an awesome show! I will be very dissappointed if it isnt renewed for many seasons to come

The wife and I love the Rookie and are glad the show got renewed for season 2. The show makes us happy.

We love the Rookie!

I love the show, ALL the characters and plot lines! It definitely makes me laugh and brings tears to my eyes. I look forward to next season. I’m thrilled The Rookie was renewed!