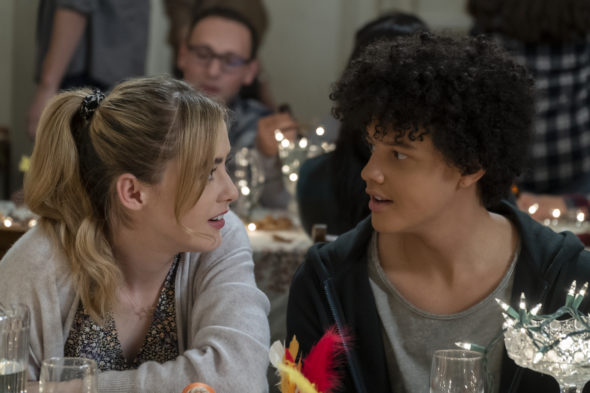 More pie. More answers. Netflix has renewed The Society TV show for a second season. The YA series, which just debuted on May 10th, will return for season two in 2020, with production beginning later in 2019. Below, check out the season two renewal announcement video featuring The Society cast.

The Society Renewed for Season Two on Netflix

While Netflix, like other streamers, does not release viewership data, sources tell THR that the series was a strong performer internationally, which helped secure a second season after a soft U.S. performance. (Netflix’s YA favorite 13 Reasons Why also performs well internationally.)

“[S]eason [one] deals a lot with men versus women, and it deals only briefly with race, but I think you can expect that conversation about class and race to keep coming up,” Keyser told THR about his larger focus for The Society. “All these things need to be re-litigated in a world in which there are no givens. We hope, over time, and if we’re lucky enough to get a season two, to explore all the social contract questions that we take for granted.”

Looks like it is time for that deep dive.

In related news, Keyser and Amy Lippman created Party of Five which ran on FOX between 1994 and 2000. The duo is rebooting that series, with a new cast, for Freeform.

What do you think? Have you watched season one of The Society TV series? Do you think you’ll check out the second season, when it premieres on Netflix? Let us know below.

Wow, that’s a relief, I was so worried this show wouldn’t get renewed, Hallelujah!