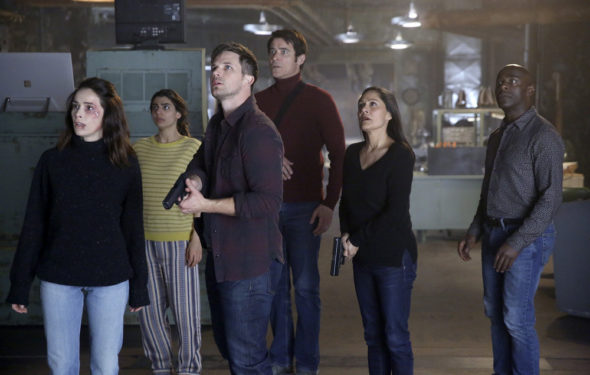 How much time remains on the Time Team’s clock is currently up for debate. Sony is in negotiations with NBC over a Timeless season three renewal. Reportedly, the lower-rated, smart and critically acclaimed fan-favorite is one quarter of a four-show deal between the studio and network. Last year, NBC famously renewed Timeless days after cancelling it. As part of that renewal agreement, production moved from Canada to California to take advantage of the state’s tax incentives. Incentives for this cycle are still to be announced, so whether Timeless will be cancelled or renewed for a third season may well depend on how much the Peacock Network wants Sony’s other offerings.

An NBC time travel drama, Timeless stars Abigail Spencer, Matt Lanter, Malcolm Barrett, Goran Višnjić, Paterson Joseph, Sakina Jaffrey, and Claudia Doumit. In season two, the action-adventure series follows Lucy (Spencer), Rufus (Barrett), Wyatt (Lanter), and Jiya (Doumit) on their quest to prevent the destruction of our world as we know it. Now they’re working with, instead of against Flynn (Višnjić), despite their misgivings. Agent Denise Christopher (Jaffrey) and Connor Mason (Joseph) have started to become more involved in the action.

The second season of Timeless is averaging a 0.62 rating in the 18-49 demographic and 2.59 million viewers. Compared to season one, that’s down by 43% and 44%, respectively. Of the 19 scripted NBC TV shows we’re currently tracking, it ranks 17th in terms of its demo numbers and falls one slot to 18th place, when we sort by total audience size.

Sony and NBC Negotiate to Renew Timeless for Season Three

On the table, alongside Timeless are two news shows: Norman Lear and Peter Tolan’s single-camera comedy, Guess Who Died and a spin-off of Bad Boys called the L.A.’s Finest, which stars Gabrielle Union and Jessica Alba. Finishing off the foursome is a potential sixth season of The Blacklist, which, five years ago, was the grand prize of a similar deal. Here are the details, from Deadline:

In May 2013, Sony Pictures TV was behind NBC’s most buzzed about pilot, drama The Blacklist, at the time the highest testing NBC drama pilots in 10 years. And yet, The Blacklist was one of the last pilots to be picked up to series by the network on Friday evening, just hours before NBC was to unveil its fall schedule on Sunday ahead of its Monday upfront presentation. That was because NBC and Sony TV had been embroiled in intense and complex negotiations involving four projects in contention that spanned several days. In the end, with The Blacklist leading the way, NBC picked up all four shows. That included series orders to three Sony TV pilots — the James Spader thriller, which landed the coveted Monday 10 PM time slot, blended family comedy Welcome To The Family and off-cycle medical drama The Night Shift — as well as a renewal of cult favorite Community, which had been heavily on the bubble.

Five years later, NBC and Sony TV once again are deep in a four-show negotiation that involves a solid drama pilot, the Bad Boys offshoot L.A.’s Finest starring Gabrielle Union and Jessica Alba. There is also a cult favorite heavily on the bubble, drama Timeless, and a single-camera comedy pilot, Norman Lear and Peter Tolan’s Guess Who Died, joined by 2013 hotshot, The Blacklist, which is looking to secure a sixth season renewal.

L.A.’s Finest has been among the most talked about pilots this season with its pedigree, auspices and cast. Guess Who Died has flown largely under the radar, having received an early pilot order, though the project had had internal support since the script stage and is believed to have a shot.

Despite no longer the ratings blockbuster it was before its move to Thursday, The Blacklist still is a pretty consistent performer with an established fan base. It is NBC’s highest rated and most watched drama series behind This Is Us and the four Dick Wolf shows. The Blacklist also makes money from SVOD and international deals, and NBC owns a piece of the series, making a renewal more appealing.

After beating cancellation once, the odds for Timeless doing it again are long based on its Season 2 ratings performance after a long hiatus, but the time-travel drama has proven the fierce loyalty of its fans, so another short order may not be out of the question if that is financially feasible given the series’ significant budget. For a second consecutive year, Timeless ranked as No.1 on USA Today’s Save our Shows poll. Additionally, the show’s fans have been flexing their muscles, flooding NBC’s Twitter feed with #RenewTimeless messages.

Clockblockers, if you haven’t already, head on over to the television vulture’s Timeless season three Vulture Watch feature, and subscribe for free Timeless cancellation or renewal alerts, and hit up the banner link below, to rate each episode of Timeless.

The two-part Timeless season two finale airs this Sunday, May 13th from 9:00 to 11:00pm ET/PT. Will it also be the Timeless TV series finale? Stay tuned.

What do you think? Should the Timeless TV series be cancelled or renewed for season three on NBC? Sound off, in the comments.

Renew Timeless, it is amazing how accurate the show is when it comes to actual events in history. One of the most intelligent shows on the air. Todays TV Shows are filled with predictable comedies. Don’t let an intelligent show that makes you think go away!

Yes! Renew Timeless for a third season! The show just seems to be coming in to their own. Season Three should be the best yet, especially if they circle back and connect some dots concerning the characters’ pasts, as well as futures! And face it, everybody loves a good time-travel story!

#RenewTimeless! I watch in UK and I know that I’m not part of ratings Timeless is one of very few TV shows left that have a smart and educational dialogue. We need more shows like this , enough with cops, vain reality shows and dumbing ones!

renew please. This is a great show..

Timeless should be renewed!! It’s an amazing show with wonderful actors!!

Please renew! It is a great entertaining show! Love each actor and love the history. So many questions and so much to find out. Bring it back! Keep us guessing what will happen next. Great writers!

Renew PLEASE!! It’s one of the best shows on TV

Please, please renew Timeless. I’m so tired of hearing about the 18-49 demographic. What about us that are 50 & over? This is a great show, plus brings some history knowledge into our homes!

Please renew Timeless! So nice to be able to watch a show the whole family can enjoy and which is neither law enforcement or medical-related. Love the time travel to the past and the historical exposure related to it.

Renew! We love this show! It just can’t end this way!!

Please don’t cancel a show that could someday be the American equivalent of Dr. Who. If this was ever released to Netflix the fan ratings would go through the roof. NBC, don’t let it be said that you cancelled a future classic.