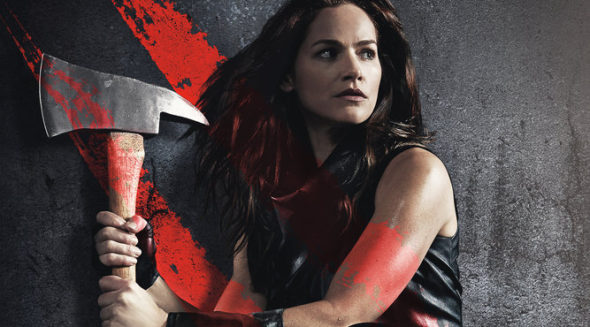 Can Van and her show survive? Has the Van Helsing TV show been cancelled or renewed for a fifth season on Syfy? The television vulture is watching all the latest cancellation and renewal news, so this page is the place to track the status of Van Helsing, season five. Bookmark it, or subscribe for the latest updates. Remember, the television vulture is watching your shows. Are you?

Airing on the Syfy television channel, Van Helsing, stars Kelly Overton, Jonathan Scarfe, Christopher Heyerdahl, Neal McDonough, Vincent Gale, Rukiya Bernard, and Aleks Paunovic. Joining the cast are Tricia Helfer, Richard Harmon, Nicole Munoz, Keeya King, and pro-wrestler Big Show. The show centers on Van Helsing descendent Vanessa “Van” Helsing, who awoke from a coma to find vampires had overtaken the world. A prime target for the vampires, she’s also humanity’s last hope with her immunity to vampires and her ability to turn them into humans. In season four, the first of four vampire elders has been freed and legend has it that when their four Totems are combined, the Dark One will be resurrected. It’s a race against time as Van and her ragtag group of heroes face off against the forces of darkness.

The fourth season of Van Helsing averaged a 0.08 rating in the 18-49 demographic and 296,000 viewers. Compared to season three, that’s down by 9% in the demo and down by 23% in viewership. Find out how Van Helsing stacks up against other Syfy TV shows.

Will Syfy cancel or renew Van Helsing for season five? The ratings are down but the channel already cancelled several other shows in the past year and I wouldn’t think they’d cancel any others for awhile. This one could go either way though. I’ll keep an eye on the ratings and update this page with breaking developments. Subscribe for free alerts on Van Helsing cancellation or renewal news.

12/17/19 update: Van Helsing has been renewed for a fifth and final season.

What do you think? Are you glad that the Van Helsing TV show has been renewed for a fifth season? Are you sorry that that will be the final season as well?

Please Renew the fifth season as we are anxiously awaiting news of the sisters outcome and the hopeful return of V and Scarlet. I love love this show

The show got better season after season and that is rare in my opinion. I hope they renew it.

I’d be sooo disappointed if they cancelled!!! I love it!

I’d be soo disappointed if they cancelled. I love it!

I love Van Helsing and would be so sad if SyFy cancels it. In my opinion they air some of the best shows on TV, but it’s become such a bloodbath over there that no one wants to get attached to yet another show that is just going to end up getting axed. If they just showed that they believed in their own programming people would come back. But instead they went ahead and cancelled Happy!, Deadly Class, and Kypton. That leaves, what, 3 shows on the network? It’s utterly insane. I miss happier times when I was giddy because… Read more »

don’t cancel this show. the best vampire show ever. want season five…… and six and… u get the point..

I can’t be the only one who loves this series? A good series ending is a sobering reminder that nothing lasts forever. I guess I just don’t understand how more people don’t love this storyline, it’s characters, and the action/adrenaline packed episodes. If it ends soon, all I ask is that Scarlet somehow comes back, and that the series ends with her and Axel together and the Dark One dead.

We need a season 5

Best in the world
Reply to  Stephen Dale Howell

I hope so too. Maybe it will be the last season and I can finally decide whether or not to watch this show. I have a feeling it is right up my ally, but I don’t watch shows anymore until I am sure it won’t have what I call a “screw you” ending. Ie, a fade to black like in sopranos, or a cliff hanger which perfectly sets up the next season, but wham it turns out it is the final episode. Why can’t people have a back up episode so this doesn’t happen, or maybe make sure the contract… Read more »

My husband and I love. VAN HELSING. We want to see it renewed for a 5th season and even a 6th and 7th.

Best in the world
Reply to  Melissa Lambert

my reply to this would be a repeat to Stephen Dale Howell, so please read that if you are interested.

No ones forcing you to watch

Best in the world
Reply to  sam

I think maybe because of international viewership, I know it is pretty popular on Netflix out my way.

Really Good Show. Kelly is Really Great on the Show!!!!

I really liked the show at first, but now it has delved so deeply into Satanism it’s lost its appeal.

Best in the world
Reply to  Shock1327

Come on it is a show about vampires. Kind of like taking kids to see a horror movie and complaining that they couldn’t sleep at night.

I love the tv show Van Helsing I love everything about it. I think it would be really messed up if it got canceled, every time I find something I really like it gets canceled if anything else gets canceled that I like I think I’d band tv. Just saying….

deb
Reply to  Becky B.

Hey Becky-you might try watching shows that have reached their conclusion and are still amazingly great-6 feet under, battlestar galactica, the 100 (not quite over yet), Lucifer etc. I understand your frustration, but sometimes looking back, instead of ahead toward a canceled show, can be more gratifying.

Best in the world
Reply to  deb

Deb,
There is a time when a show becomes too old to watch it. For me, if it isn’t in HD I won’t watch it. I didn’t pay almost $3000 on a tv so that the show only uses about maybe 50% of the screen. But hey that is just my opinion and to each their own I guess. Maybe more networks should use the 1 and 99 method as I think it is called.

Best in the world
Reply to  Becky B.

Hey Becky B, I know what you mean! This is why the only shows I will watch as it airs are Chuck Lore shows. I don’t know why, but that man seams to always deliver the goods. I haven’t watched any of this show yet, (am interested in watching it though) as I want to wait until it has a satisfactory ending before I devote any of my time to it.