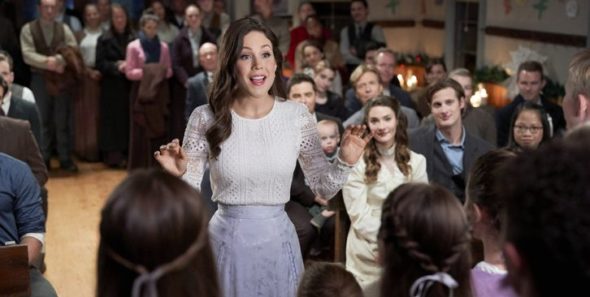 The seventh season of When Calls the Heart averaged a 0.24 rating in the 18-49 demographic and 2.40 million viewers. Compared to season six, that’s down by 10% in the demo and down by 2% in viewership. Find out how When Calls the Heart stacks up against other Hallmark Channel TV shows.

4/28/20 update: When Calls the Heart has been renewed for an eighth season.

What do you think? Are you glad that the When Calls the Heart TV show was renewed for an eighth season? How would you feel if Hallmark Channel had cancelled this TV series, instead?

Everybody makes mistakes. take a chance on Abigail. bring her back. there is a suttle romantic feeling between her and Henry. i would like to see that relationship work out.
that was another exciting part of the show i look forward to seeing.

The relationship between Nathan and his niece should be made stronger, i get a stan offish sort of feeling. No true father like relationship. let him spend time with her with Elizabeth looking on from far. refusing to attend certain get togethers to spend time with his niece. a real role model. Mountie Jack had strengths like knowing Art etc. give Nathan something /somethings that out shadow Jacks character. that the viewrship will look forward to. make the citizens of Hope Valley seek his presence to feel secure. To know “Yes a man is around ” . dont make his… Read more »

I hope there is a season 8 of When Calls the Heart its quite interesting to know if Elizabeth will end up with the Bartender or the Mountie. Also whether the lady Friend. Abigail will return to the show. i hope she does and i hope Daniel Spelling don’t return. It was sad enough dealing with his death. now all has moved on and the show has cleansed itself of the casualties. i hope Rosemary does have a baby and also adopts a child. The Dr and the Nurse should get together. the Mountie , Nathan should be given a… Read more »

Please renew When Calls the Heart.
Love the chemistry between Elizabeth and Lucas!

Please continue this series. It is my favorite television series. I keep checking to see when it will return

I am hoping that the eighth season of when calls the heart will air soon. It is my favorite show, series. I keep checking because I don’t want to miss the beginning of the next season. I have even begun watching it from the beginning again however, it’s not the same

My husband and I really love this show. We hope it will continue for a long time.

I can wait for season 8 to start. I adore this show.

Hope when calls the heart continues on and the younger cast has more story lines happening.

I love this show! Recording it insures that I will never miss an episode. I was disappointed when ” Mountie Jack” left the show so soon after the long anticipated wedding. The loss of L. Loughlin was unfortunate. However, the addition of new characters and the expanded roles of others continues to bring delightful episodes to Hope Valley. So much like “true” life with the comings and goings of friends and family. I would definitely watch future seasons of this show. So glad that Hallmark has a family series without the bad language, violence, inappropriate behavior, and “junk” that so… Read more »

Yes, I love this series. I love the scenery, the characters, especially Chris McNalley. This series is refreshing to watch compared to those horrible movies on other channels. I am also a fan of Home and Family. I watch every morning or if I cant watch it, then I record.