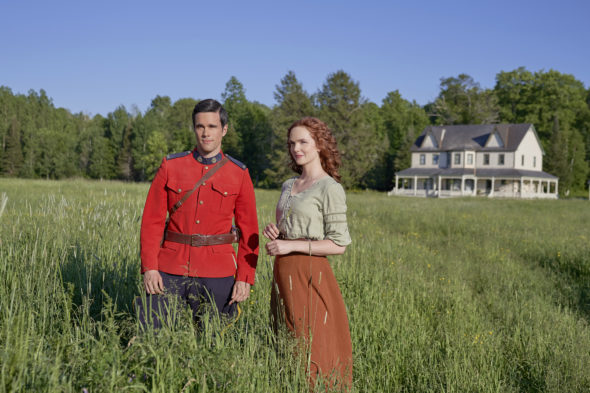 Last year, Hallmark launched the When Hope Calls TV series, a spin-off of Hallmark Channel’s When Calls the Heart TV series. The company upset some fans because When Hope Calls was released as an exclusive of the Hallmark Movies Now streaming service. The first season of 10 episodes wrapped in October 2019 and has yet to be cancelled or renewed for a second season. Now, the western drama series is coming to cable.

When Hope Calls stars Morgan Kohan, Jocelyn Hudon, Ryan-James Hatanaka, Greg Hovanessian, Wendy Crewson, Hanneke Talbot, and Jefferson Brown. The series kicks off in 1916 and centers on two sisters, Lillian (Kohan) and Grace (Hudon), who were orphaned and separated as toddlers. Now that they’re adults, Lillian and Grace have reunited and opened an orphanage in the ranching town of Brookfield.

When Hope Calls will air after on Sundays, starting on February 23rd, at 9:00 PM. The episodes will follow seventh season installments of When Calls the Heart.

SAVE YOUR SUNDAY NIGHTS FOR HALLMARK CHANNEL

Season 1 of the Hit Series “When Hope Calls” Will Make Its Cable Premiere On Sunday, February 23rd
Airing on Sundays After New Episodes of Season 7 of “When Calls the Heart”

“When Hope Calls” will make its Cable premiere with Season 1 on Sunday, February 23, (9 p.m. ET/PT), on Hallmark Channel, following cable’s hit series, “When Calls the Heart” every Sunday.

“I am thrilled that “When Hope Calls” will be part of the Sunday night lineup following the beloved TV series, “When Calls the Heart” season 7 on Hallmark Channel,” said Morgan Kohan who plays Lillian. “Fans can get their fix all in one night with the back-to-back airing of both shows. From Hope Valley, to the town of Brookfield, I hope fans will fall in love with all of the characters, and their heartfelt themes of community, family and love.”

“When Hope Calls,” a spin-off series of Hallmark Channel’s “When Calls the Heart,” tells the story of sisters Lillian (Morgan Kohan) and Grace (Jocelyn Hudon) who open an orphanage in the 1916 Western town of Brookfield. Caught between the traditions of cattle ranchers and the ambitions of a growing town, they strive to find romance and happiness while overcoming the challenges of helping the children in their care. Throughout their journey, they discover community, acceptance and love as they create the family they always longed to have.

Sundays are our favorite days of the week! Catch the Season Premiere of #WhenCallsTheHeart at 8pm/7c followed by the #1 Series Premiere of #WhenHopeCalls on Sunday, February 23 at 9pm/8c! Follow your heart to Sunday nights! pic.twitter.com/qOL4QFmxZ7

What do you think? Have you watched the When Hope Calls TV series on Hallmark Movies Now? Will you be tuning in to watch the first season on cable? Are you hoping that the show’s renewed for a second season?

How can I see the last episode of season 2020 When Hope Calls? I didn’t tape it, because the guide on Dish had it was a rerun. I don’t have streaming capability.

Very happy that HM has moved When Hope Calls to their channel. I wasn’t going to pay for another show on top of what I already pay for DirecTV service. Thank you HM… Have we missed all the shows that appeared on HM Movies Now? Or are you repeating last season?
Thank you.

I’ve waited since fall for season 2 to be aired! Now, it’s just season 1 again. ‍♀️ I wish someone had told me I was just a guinea pig for your Hallmark Movies Now streaming service. While I enjoyed season 1, I won’t be watching it again. I’ve already watched the season twice. *Sigh*

I hope When Hope Calls is renewed for season 2!!! Love this show

I wonder if Hallmark is feeling the blow back from cable subscribers who already pay out the wazoo to watch channels, including Hallmark. I, for one, refuse to pay for their streaming service when I already pay too much to be able to watch all of the Hallmark channels on FIOS. I hope this is an indication that people are finally fed up with the high cost of tv shows.

Yes! I will certainly watch When Hope Calls! Wonderful news!!

Sooooo .. I consider myself a “Hearty”. I probably benged watched the entire ‘When Calls the Heart’ series on Roku, in less than a month. And I was able to watch last season – a week later – through Roku on the Hallmark App, however this season – I cannot. Can anyone please advise me on this?

I’m very happy When Hope Calls is following WCTH on cable. I don’t have the technology to stream. THANK YOU!

I will definitely watch it now that it will be available on my cable.

I can’t wait for when hope calls the heart starts again! There is to much time in between series!

HOPE this means that the new Signed ,Sealed,Delivered will be shown on either hallmark or hallmark movies & mysteries , so those who dont get hallmark drama through our cable companies ,can see those new movies as well.