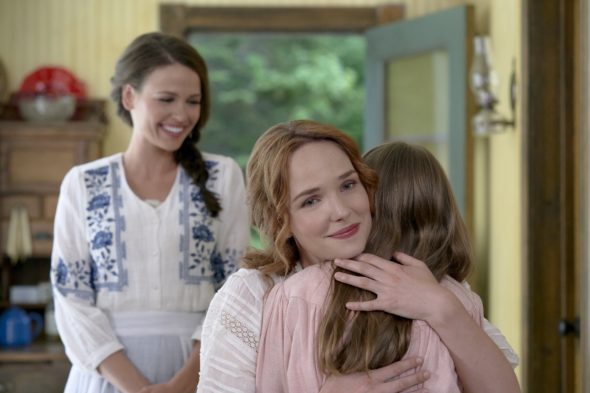 When Hope Calls will be back. The drama series has been renewed for a second season but is moving to the new GAC Family channel. Formerly known as Great American Country, GAC Family is run by President & CEO Bill Abbott, the former CEO of Hallmark Channel parent Crown Media Family Networks.

In addition, Lori Loughlin (below) will reprise her When Calls the Heart role as Abigail Stanton in the two-part second season premiere, When Hope Calls: A Country Christmas, which is slated for Saturday, December 18th. 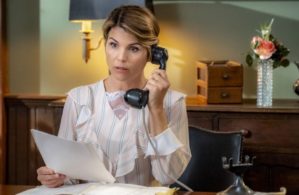 This is Loughlin’s first acting role since completing her sentence in connection with the 2019 college admissions bribery scandal. It’s unclear if Loughlin will return to Hallmark’s When Calls the Heart which was renewed for a ninth season in May.  The channel previously cut ties with Loughlin over the scandal in 2019.

A spin-off of When Calls the Heart, the When Hope Calls series kicks off in 1916 and centers on two sisters, Lillian (Morgan Kohan) and Grace (Jocelyn Hudon), who were orphaned and separated as toddlers. Now that they’re adults, Lillian and Grace have reunited and opened an orphanage in the ranching town of Brookfield.

Here’s the official announcement about the When Hope Calls renewal:

NEW YORK, Sept. 28, 2021 /PRNewswire/ — GAC Family today announced season two of the hit series “When Hope Calls” will premiere exclusively on the network this holiday season. Lori Loughlin (“When Calls the Heart,” “Fuller House”) is set to guest star in the original series reprising the role of her beloved TV character, Abigail Stanton. The two-part premiere titled “When Hope Calls: A Country Christmas” debuts Saturday, December 18. The announcement was made today by Bill Abbott, President & CEO of GAC Media.

“When Hope Calls” is set in Brookfield, a town on the western prairie with a deep sense of acceptance, love, and family, and is a TV spinoff of award-winning author Janette Oke’s novel series, “When Calls the Heart”. In the World Premiere of “When Hope Calls: A Country Christmas, Part 1,” a Christmas festival worthy of Harper’s Bazaar happens in Brookfield as the community is one of three contenders in the magazine’s search for America’s #1 Country Christmas Town. The entire town is preoccupied with creating the essence of Christmas for the photojournalist’s lens, though, behind the scenes, residents are not living the spirit of the season. In the midst of the fuss, a stagecoach appears, and out steps Abigail Stanton and her son, Cody who have brought a troubled boy to Lillian’s orphanage. Episode 201 of “When Hope Calls” premieres Saturday, December 18 at 8 pm ET/PT.

In the World Premiere of “When Hope Calls: A Country Christmas, Part 2,” photojournalist Paul Franklin is wrapping his research on the community of Brookfield as a contender for America’s #1 Country Christmas Town. By now, Paul blends in as the town prepares for Christmas Eve. Lillian, the orphans, and Gabriel are running out of options to restore the troubled boy’s hope for better times. Just when all seems lost, a secret Santa appears to fulfill all holiday wishes, and Abigail has a profound conversation with a dear friend from the past. Meanwhile, Paul’s lens is recording every miraculous moment. Episode 202 of “When Hope Calls” premieres Saturday, December 18 at 9 pm ET/PT.

Additional casting information will be announced at a later date.

What do you think? Are you a fan of When Hope Calls? Will you watch season two on GAC Family?

I AM THRILLED BEYOND BELIEF THAT WHEN HOPE CALLS IS COMING BACK ON. PLEASE TELL ME HOW TO WATCH IT. I WAS SICK WITH COVID IN NOVEMBER/DECEMBER 2021. OH I AM SO EXCITING AND I CAN’T WAIT TO TELL ALL MY FRIENDS AS I AM SURE THEY WILL BE WATCHING TOO! GOD BLESS YOU AND THANK YOU FOR BRINGING THE BEST SHOW BACK TO ITS VIEWERS!