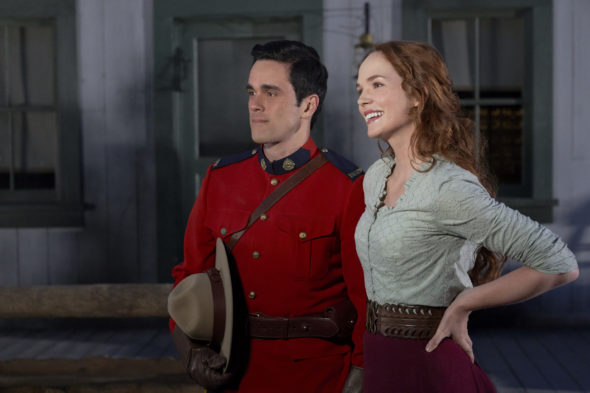 Last year, Hallmark upset some viewers by producing When Hope Calls as an exclusive for the company’s online streaming service, Hallmark Movies Now. When Hope Calls launched in August 2019 and it’s unclear if it was a success. Six months later, the show still hasn’t been cancelled or renewed. Now, Hallmark has begun airing the first season on its regular Hallmark Channel. Will the additional revenue from these airings help get When Hope Calls renewed for season two or, will it be cancelled? Stay tuned. *Status update below.

A western Canadian drama, the When Hope Calls stars Morgan Kohan, Jocelyn Hudon, Ryan-James Hatanaka, Greg Hovanessian, Wendy Crewson, Hanneke Talbot, and Jefferson Brown. A spin-off of When Calls the Heart, the series kicks off in 1916 and centers on two sisters, Lillian (Kohan) and Grace (Hudon), who were orphaned and separated as toddlers. Now that they’re adults, Lillian and Grace have reunited and opened an orphanage in the ranching town of Brookfield.

What do you think? Do you like the When Hope Calls TV series on Hallmark Channel? Should it be cancelled or renewed for a second season?

Looking Forward in seeing When Hope Calls Christmas. Will be very interesting show with familiar faces.

Why am I not shocked that Hallmark has not renewed When Hope Calls as of today’s date. This show is so nice, and of course there has to be some “bad guys” it is just is the way it is. And we know the Mounties always get their man, so the town is safe. This is a show you can watch with your children. The premise of this show with the orphans oozes goodness, I guess that is why Hallmark has not renewed it yet. HM seems to be going in another direction, they obviously forgot that old saying, “If… Read more »

Absolutely Love When Hope Calls and When Calls the Heart! Can’t wait for more of both stories. Please keep the wholesome tv coming!

I have been so patient waiting for the 2nd season of When Hope Calls. Come on Hallmark Channel we need another season. We really miss watching the show.

I love the program. It kept my attention and I found it interesting. I hope they bring it back.
That’s all I have to look forward to. Also when calls the heart. I had to buy two different
Streaming service to get them both. I can’t afford cable. Lot of people who can’t afford cable like me would be happy to pay hallmark
to get their shoes. So please bring it back. I rather watch loving movies then all this killing that’s on tv.

What an excellent show! I’ve enjoyed it so much. I am hopeful you will renew this and get us going with Season 2! Love it along with When Calls The Heart…two exciting, wholesome programs! Please give us more!