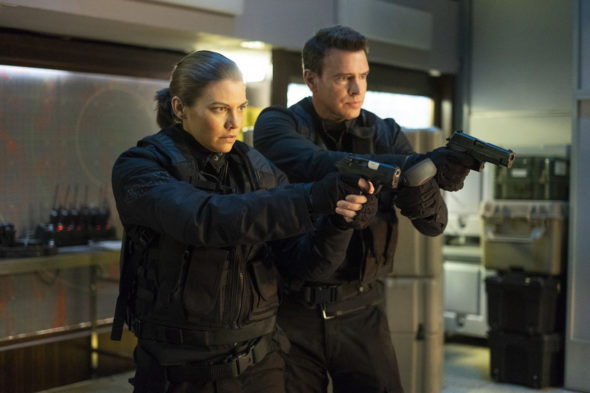 It seems likely that Will and Frankie didn’t see this coming. ABC has cancelled the low-rated Whiskey Cavalier TV show so there won’t be a second season — at least on the alphabet network.

Airing on Wednesday nights, the first season of Whiskey Cavalier is averaging a 0.59 rating in the 18-49 demographic and 3.47 million viewers.

Out of the 21 scripted ABC TV shows of the 2018-19 season, Whiskey Cavalier is in 18th place in the demo and 13th place in total viewership.

The decision to renew or cancel Whiskey Cavalier reportedly came down to the wire. Word is that Warner Bros TV will be shopping season two to other outlets so there is some small hope that the series will survive.

What do you think? Do you enjoy the Whiskey Cavalier TV show? Would you have watched season two of this ABC series?

Just pure fun. A quirky spy comedy-drama with an enchanting cast of characters. Hopefully the network finds a new place for this or it continues on another network.

One of my FAVORITE series last year!!!! Would absolutely LOVE to see Season 2 as well as additional ones. So refreshing to view a show that’s filled with witty dry humor and action. Additionally it includes two cute & sexy main characters who are extremely intelligent & competitive yet interact with an undertone of playful love & respect for one another. I’m quite surprised to hear this show had low ratings and that they didn’t try a different time slot before canceling the series altogether

would love to see season 2. so tired of reality shows, twisted dramas and bad half hour sitcoms. great to see a show with characters that are actually likable.

We finally had a show that was worth looking forward to and the network drops it???? I often wonder if the networks know that middle America has different opinions on what is good tv than those in NY & LA. The population of Mid America that consume the products from the company’s that buy time slots for commercials (You know how they make their money)
Bring back Whiskey

I looked forward to this show every week. No use getting hooked on anything that hints comedy and drama together. Reality shows are not worth watching.I hope some other outlet picks them up.

Great Show. It’s a relief to see an entertaining show that doesn’t take it self too seriously.
A bonus is the fact that it isn’t a reality show.

I really like this series. The stories are put together well. The chapters are delightful. I hope another network picks it up.

We enjoyed WC. Worthy of another season to establish a following.

I loved this show! The cast was fantastic the script was good. It was easy to get invested in the characters

I loved this show. For months, I’d been mourning the loss of a good action drama, Scandal for one. Then, Whisky Cavalier came along. It was love at first view. My cure for the loss of Scandal was finally here, and now I find out that this show is being cancelled. So sad!

This was OK fillerwhile waiting for other shows to resume, but really it is a screwball version of ?Leverage (Timothy Hutton, Christian Kane), which is *FAR* better and had several seasons. If you can find Leverage, watch it and I suspect you’ll not miss WC too much.