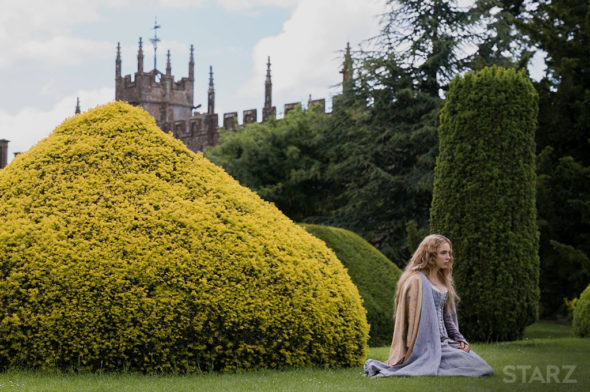 Will Henry Tudor’s marriage to Elizabeth of York ensure he remains on the throne? Has the The White Princess TV show been cancelled or renewed for a second season on Starz? The television vulture is watching all the latest cancellation and renewal news, so this page is the place to track the status of The White Princess season two. Bookmark it, or subscribe for the latest updates. Remember, the television vulture is watching your shows. Are you?

Airing on the Starz premium cable channel, The White Princess stars Jodie Comer as Princess Elizabeth of York and Jacob Collins-Levy as King Henry VII. The Starz cast also includes Essie Davis, Joanne Whalley, Michelle Fairley, Suki Waterhouse, Rebecca Benson, Rhys Connah, Caroline Goodall, Kenneth Cranham, and Vincent Regan. Beginning in 1485, the series tells the end of the saga of England’s War of the Roses and follows the rise of the House of Tudor, as well as the stormy marriage of Elizabeth of York to Henry Tudor.

Airing on Sunday nights, The White Princess TV show is drawing decent ratings for a Starz series. The cable channel has been calling it a “limited series” but it seems more like a mini-series. I suspect there will only be one season of eight episodes but, if the numbers are good enough, who knows? I’ll keep an eye on the ratings. Subscribe for free alerts regarding any cancellation or renewal news about The White Princess.
6/5/17 update: It was revealed that thesere won’t be a second season of The White Princess. Details here.

What do you think? Were you hoping that The White Princess TV show would be renewed for a second season?

The White Princess was an extraordinary Show. It’s ashame they didn’t continue with The End of the War of the Roses. I would have loved to see how their Love Story played out and watched to see the children grow up. Find out who was in line to take the throne. So many movies & series about Henry the 8th. I was interested in finding out the intriguing stories that led up to Henry the 8th. This was a beautiful Love storyline. It’s ashame they cancelled it. Especially for History buffs like myself. The cast was Perfect. I’m sad, I… Read more »

I was hoping for a Season 2!

I really enjoyed this show. I find it very irresponsible for Starz not to provide closure on this depiction of history. I don’t think I’ll be watching anymore of Starz. They just might forget their loyalty to viewers, again. I see no TV viewing pleasure in that.

Please, please please have a 2nd season for THE WHITE PRINCESS. One of the best series ever on television. Excellent series. Also love Magic City. Another great series that should be a permanent series. Come on guys, you have excellent shows and you cancel them and leave the crap shows alone.

I can’t believe they canceled this show one of the best shows on!! I think I’ll cancel my starz channel

THOUGHT IT WAS A GOOD SHOW.SEASON 2 PLEASE

Need more if this series! Absolutely love it !

I would love to see season two of the show.

We need White Princess back
You can’t do this

They always cancel all the good shows, so disappointed

I am a true fan of the White Princess. It gives the veiwer a chance to go back in time and imagine what it was like. Being a female myself I was blowned away by the series. So to Starz u have to make Season 2. What will the veiwers think if we couldn’t see Lizzie and Henry. That would truly stop alot of Imagination for Princesses all over the world who really enjoy the show. U gave it to us now u want to take it back. Shame on Starz. Yours Truly, TRUE. FAN

we loved the show. Very disappointed it is o er, feel betrayed