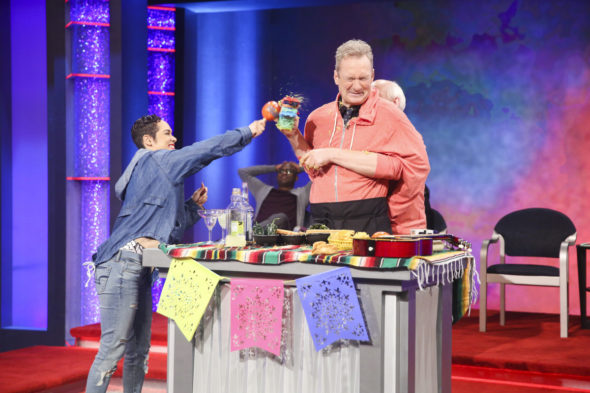 Here’s what we do know: The CW’s Whose Line Is It Anyway? TV show has not been cancelled. We also know the littlest network has announced that there are new episodes of Whose Line Is It Anyway? coming in the summer of 2018. Back in October, star Colin Mochrie tweeted that the series had received a renewal. Today’s press release, instead, makes it sound like those episodes were already in the can and may not be part of a new, 14th season.

Airing on The CW television network, Whose Line Is It Anyway? is a comedy improv series, hosted by Aisha Tyler. The show features Ryan Stiles, Wayne Brady, and Mochrie improvising, along with a guest comics. The cast tests its comedic chops with improvisational games. At the end of each round, Tyler awards points for their work, and those points count for absolutely nothing. Frequent guests include Brad Sherwood and Greg Proops.

Whose Line Is It Anyway?: A Look at the Ratings

The 13th season of Whose Line Is It Anyway? averaged a 0.29 rating in the 18-49 demographic and 1.10 million viewers. Compared to season 12, it was down by 22% and down by 8%, respectively. Although the ratings have fallen over the years, Whose Line Is It Anyway? was still the second best rated summer TV series on The CW, during the 2016-17 television season.

Sometimes a renewal stalls out, not because the network doesn’t want a new season, but because the network is in the midst of contract negotiations. That could very well be the case here, considering that today, The CW did renew Penn & Teller: Fool Us and Masters of Illusion. When we know more, you will too.

Check out this CW press release excerpt, to learn more.

“MASTERS OF ILLUSION” AND “WHOSE LINE IS IT ANYWAY?”

Based on the wildly successful U.K. format, which also spawned a previous incarnation in the U.S. that ran for eight seasons on ABC, WHOSE LINE IS IT ANYWAY? is executive produced by Dan Patterson, Mark Leveson, Jimmy Mulville, Ryan Stiles, Wayne Brady and Colin Mochrie. Created by Dan Patterson and Mark Leveson, WHOSE LINE IS IT ANYWAY? is from Angst Productions and Hat Trick Productions.

What do you think? Are you still watching the Whose Line Is It Anyway? TV series? Should it be cancelled or renewed for season 14 on The CW? Sound off, in the comments.

Please keep renewing “whose line”. We watch it whenever it’s on and it’s one of the truly funny comedy shows on tv.

Great show! It makes me laugh. Please renew this wonderful show. I am terminally ill and this show lights up my day!

They did not tape any new episodes this year because they have hours of unused footage…ryan started on twitter that this was the plan this year…this is also what happened at abc..so hopefully 2019 will see new tapings since everything you see is taped in 2017..

Watched Whose Line Is It for many years. Just viewed a 6/18 episode and had to listen to political overtones thruout the show. Will not be watching the show going forward due to the politics injected in the script. Stick to humor and leave politics out of the show-people are tired of biased political dialogue.

Renew the show! It is so so funny! We watch it currently on the cwseed. We didn’t realize it was still on or we would have been watching sooner. You can not beat, Colin, Ryan, Wayne, and/or Brad, Greg, or the rest to make you laugh! Honestly, if we spread the word we know there would be more viewers. This is why Colin and Brad’s scared scriptless tour gets sold out along with the other improv shows with Ryan, Greg and crew on tour. You betcha we go and then want more! We need to see Colin and Ryan mess… Read more »

Watched all the US shows then the British ones. So happy when they renewed it with Aisha. Found the UP channel now we watch that every night. Was waiting and hoping it would be renewed again. Always laugh and have a good time with this show, especially needed these days. Keep them coming .

I’ve been watching repeats on the Up Network until I can get new shows on the CW. It’s one of the only shows where I actually laugh. I watch some of the “comedies” on tv and wonder when they’re going to make me at least chuckle and it never happens. I hope they come back soon

Love it. Keep it

Absolutely should be renewed! One of the best shows on TV with the most talented cast.

I’ve never laughed harder than when I’m watching WLIIA. Probably the most consistently funny show in TV.
I’d love to see Drew Carey do a guest star appearance. (Or, for you real Whose Line fans, Josie Lawrence…)

Go ahead and order ten more seasons, CW. TV owes you one.

I personally love “whose line is it anyway?” it a show I have watched for years. I think it should be renewed. I really enjoy the show