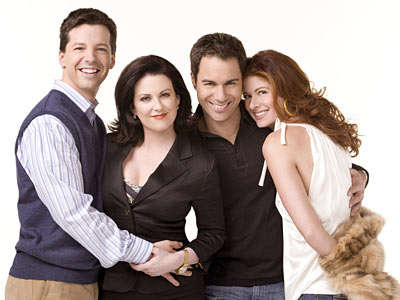 Original Series Finale:
Episode #194 — The Finale
Will and Grace have a falling out that lasts for years. In the interim, Grace and Leo (Harry Connick, Jr.) have a daughter and Will and Vince (Bobby Cannavale) have a son. Will and Grace reconcile when their children meet in college and later get married. Karen and Jack remain close friends throughout the years. (You can read a detailed description here.)
First aired: May 18, 2006
Revival Series Finale:
Episode #246 — It’s Time
With the apartment packed up, Will is determined to not reminisce about his life in the city or his ex, McCoy (guest star Matt Bomer). Grace, on the verge of giving birth, keeps having false alarms of going into labor. At the behest of Stan, Karen goes to the top of the Statue of Liberty to get closure with her ex-husband. And Jack’s dream of taking a bow on a Broadway stage becomes a very real possibility. Minnie Driver and Brian Jordan Alvarez guest star.
First aired: April 23, 2020.

What do you think? Do you like the Will & Grace TV show? Do you think it should have been renewed for a 12th season?

This show was bad the first time around. It has only managed to come back as 3 times worse.

Yay! I’ve always disliked this show! The leading actors are too good for this **** show.

I wanted to be happy this was back…..Unfortunately it stinks. I watched for 4 shows I am sorry. NOT GOOD

I so wanted to love this show and laugh as I used to in the old days but all of the political stuff just ruined it. I love Jack and Karen and wish the show was all about them but unfortunately they had to include Will and Grace, hence the name of the show. I stopped recording the show and never watched it again. So disappointed.

It’s about time that some network bigwigs got smart about reprising a winning combination. Jack and Karen are hilarious, and Will and Grace are still as wonderful as ever. Thanks for giving me something worth watching!

But of course!! Just a little toning down on politics and the sometimes crude, yes, rather filthy sexual innuendos and this show will soar to the top spot again. Take it from a fanatic….

Not At All Funny this time around. Make room for something else.

I liked it the first few seasons, but grew tired of it. I haven’t watched at all and stopped during its first run.

Are you kidding??? The writing and timing of the actors is better than ever! What great writers

Need to lose the political references. Too much. Stick with what you did best– comedy.
I can watch the news for that other stuff. This is my escape- don’t need/want to hear it here. I was sooo excited for this comeback.
Think you lost me… sad

I am very disappointed with the reboot of “Will and Grace”. Tried watching it. No great revelations. Some turds should not be dug up. This is one of them. Enough said.

will and grace is one of my all time favorites but I detest the canned laughter. it could be so much more funnier if it did not have this. use modern family as a comparison. my husband won’t even watch because of this.

[…] Krumholtz, Michael Urie, Sophia Bush, and Brandon Routh star in this series that was created by Will & Grace’s David Kohan and Max Mutchnick. It will air at 8:30pm on Monday nights (following How I Met Your […]

[…] unwatchable as it is insulting were it not for one thing: an appealingly disheveled star turn from Will & Grace’s Eric McCormack as Daniel. He’s not enough to save the show, but the mix of humor and pathos […]

Not too long ago I watched the entire series. I never watched Will & Grce while it was on honestly. But my mom was a medium fan, so I watched it with her. Honestly it was better than I thought it be. It was funny and had a lot guest stars. I do think it’s better in medium doses though. But the chemistry Eric and Debra had was great, and with Sean and Megan the cast was great. This is just me, but if Megan and Sean weren’t in the show, it wouldn’t have lasted as long or been as… Read more »

I was very happy to know the show was on again..However it is worst then I expected. We hear enough about Politics on the news etc. Then we have to hear the filthy, sexual comments that the writters think is funny, “REALLY” Magen spreads her legs & is talking to her ******!!!thats funny…really. Its like Empire with their sex etc. but at least the singing and clothing were nice to see & hear. I am very far from a prude, but why oh! why does everything have sex, it really doesn’t make the show better…….cancel that and Blackish another racist… Read more »