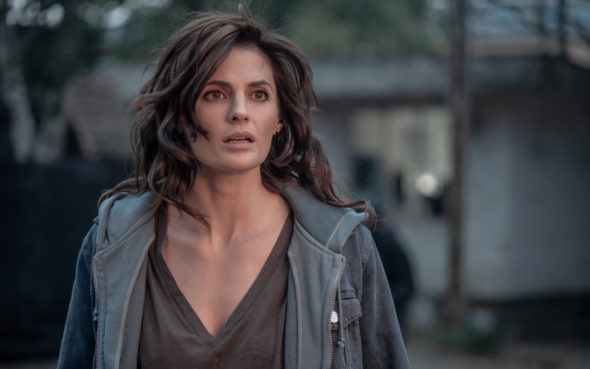 Unless they decide to publicize viewership, it is difficult to predict whether Amazon will cancel or renew Absentia for season four. My suspicion is that in part because it’s shot economically, there will be a fourth (and possibly final) season. I’ll keep my ears open and an eye out for news and will update this page with breaking developments. Subscribe for free alerts on Absentia cancellation or renewal news.

5/8/21 update: Absentia has ended so, there won’t be a fourth season on Amazon Prime Video.

What do you think? Were you hoping that the Absentia TV show would be renewed for a fourth season? Are you sorry that this Amazon TV series has ended?

I really hope this series is renewed!
I have binge watched seasons one thru three and I must admiadmit this is one of the best i have ever watched!
I am going to start re-watching because there is always something you miss!
I have told many about this series and they are in agreement with me!
The acting is wonderful and the plots are very well done!
Please! Please! Please! Tenew

Love this show! Please continue the Emily & Cal storyline. So much potential.

We loved this show and hope there is a 4th season!

I LOVED this series! Please make a season 4

I just binged watch all 3 seasons of Absentia in less than 2 days, ( getting very little sleep) — thats how AWESOME I thought it was and CAPTAVADED it had me!! GREAT SERIES, AWESOME and INTELLIGENT WRITING AND DIRECTING!! To cancel it would be truly INSANE!! PLEASE FORGIVE THIS RANT, BUT I AM SO SICK AND TIRED OF GREAT TV SHOWS being CANCELED!! Its ridiculous!! E.G.. Ray Donovan, Tyrant, Boss .The Enemy Within, The Brave, Gang Related, Code Black, soon, Animal Kingdom — the list goes on)!! What does it take for a great, entertaining, show from being canceled?… Read more »

If you want a truly exciting thriller you can understand, that has a fine cast, absolutely the best writing, and moments throughout the series where you hold your breath and your heart skips beats, this one has it all. A 10 rating spy thriller that nobody is watching, this one has held on through three seasons, each one as exciting and thrilling as it’s former, and DEFINITELY deserves a fourth season. Stana Katic alone is reason enough to watch this. SEASON FOUR PLEASE?

Please renew for at least a season 4. We love the show.

Absentia is a Brilliant, Plot Crafted Series, once you watch it, it will take a hold on you & never let you go. I have watched 14 times & will continue to watch! It would be Sinful if season 4 doesn’t happen, but I have no doubts it will be renewed. Series of this magnitude comes along one in a lifetime! I give this series a 10❤️

Take it easy. The show is okay, but definitely not “one in a lifetime.” There are a lot of moments that induce eye rolls.

A great Thriller that you have to binge watch! I have watched all seasons & cannot wait until hopefully a Season 4! Dont miss this!

Please please please! I love the show and would love more season(S)!!

Please renew Absentia for Season 4. Very tense series and my husband and I love it.

Absolutely bring on the 4th season!! Love it!