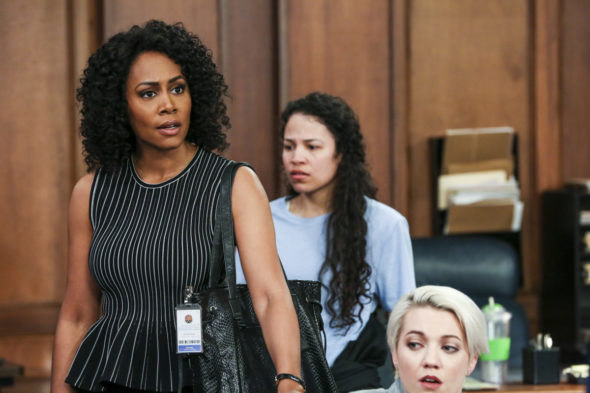 Are you judging the first season of the All Rise TV show on CBS kindly? As we all know, the Nielsen ratings typically play a big role in determining whether a TV show like All Rise is cancelled or renewed for season two. Unfortunately, most of us do not live in Nielsen households. Because many viewers feel frustration when their viewing habits and opinions aren’t considered, we’d like to offer you the chance to rate all of the first season episodes of All Rise here. *Status update below.

What do you think? Which first season episodes of the All Rise TV series do you rate as wonderful, terrible, or somewhere between? Should CBS cancel or renew All Rise for a second season? Don’t forget to vote, and share your thoughts, below.

Please renew All Rise. It is a great show and we look forward to it every week.

Love it! One of the best shows on TV

One of the best TV shows nowadays. Truly entertaining; renewal is a must.

While I am very entertained by this show, I’m even more encouraged by the message it sends to little girls and young women. Judge Judy is a strong, intelligent woman who has probably inspired girls to consider the law. In that same vein, Judge Lola ( Ms. Missick) is equally inspiring to a large demographic of women and girls. And personally, as a woman of color, I am very proud of what she ( and others on this show) represents. Ms. Missick is perfect for the role. I have to hand it to CBS re: equality with dignity in their… Read more »

From the perspective of a future lawyer and hopefully even judge… I have spent hours upon hours searching for a quality courtroom show to watch. Yesterday, I stumbled upon All Rise and it is safe to say I fell in love. It is THE ONE; THE ONLY ONE I will watch. I seriously like every single aspect of the show. In fact, it reminds me of the movie Just Mercy (which was amazing, by the way) because it tends to highlight cases where people are actually innocent, but the justice system has previously failed them one way or another. Not… Read more »

Lola Carmichael adds a favor to real life situations that have been missing from prime time tv. I love this show so that I can’t wait each week for Monday. I disappointed at the end of each episode because the time goes so quickly. CBS you hit it out of the ballpark with this show. Kudos to Simone Missick and the rest of. this outstanding cast. Everyone I know that have not been watching AllRise, once they see the show become hooked. I can’t express the level of adrenaline this show produces. CBS make sure you renew ALL RISE, don’t… Read more »

I enjoy watching this show.

I Loved All Rise, we need more of this type of show. Please give us more, more seasons of All Rise.

Love, love All Rise! CBS has found a great show and it’s hard being n the same time slot as The Bachelor. Finally a court drama with compassion and great characters. I can’t wait to see where the different relationships go. Love Amy and Mark! Such great chemistry!

Please don’t cancel. This is my favorite new show.

I absolutely love ALL RISE. It’s a really fresh law series which is one of my favourite series genre. I have high hopes for a 2nd season. I’d be really, really p*ssed off with CBS if they cancelled yet aonther brilliant series.
Excellent series – give it a watch, I highly recommend it! 10/10

I really like this show, Hope it is renewed.

Please Look on Facebook there is a whole All rise group dedicated to the show. Please don’t cancel.

Love the characters and different personalities and how they work together. Great show. Love watching every week