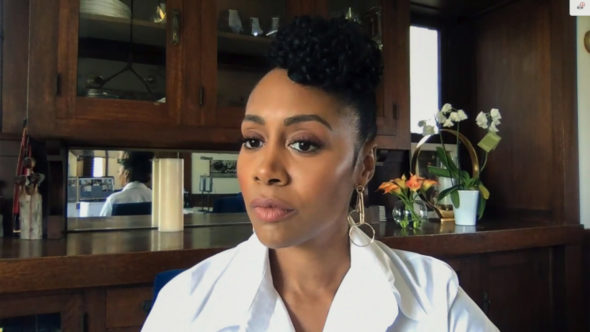 The second season of All Rise averaged a 0.45 rating in the 18-49 demographic and 3.96 million viewers. Compared to season one, that’s down by 27% in the demo and down by 27% in viewership. Find out how All Rise stacks up against other CBS TV shows.

5/16/21 update: All Rise has been cancelled by CBS so there won’t be a third season.

What do you think? Are you glad that the All Rise TV show has been would be renewed for a third season on OWN? Are you sorry that CBS cancelled this TV series?

I really like “All Rise” but was surprised when they inserted a new husband for Judge Lola. This new character and Judge Lola have no chemistry whatsoever. I definitely liked the original husband better. Their acting together truly seems forced and has no spunk. I love the rest of the show and all the other characters.

I loved All Rise. I was sorry CBS canceled it.

My husband and I loved this show. We had just loving all the characters and personalities and how each one is different but likable and how they all interact. Sad this had to end. Wish we could see it continue for sure!!!

Very disappointed to learn that this show is being cancelled. I have watched every episode, found it current & interesting. Judge Carmichael, Emily Lopez, Luke Watkins, Mark Callan all well portrayed. Example of excellent episode was attempt at virtual Court with all its frustrations.

We will miss the he story. It kept current issues in the spotlight.

I loved this show. Why do.all the good show with meaning, great story lines get cancelled and the meanless shows get renewed????

Saddened that All Rise has been canceled by CBS I loved this show and hope that it will be picked up by another station .

So disappointed this got cancelled. Loved the show and the characters dynamics. Why do the good shows get cancelled?

Liked this show a lot! They keep junk shows and cancel intelligent ones!

Sad to see this shows being cancelled. I liked this show and they will replace it with some show that I won’t be interested in!